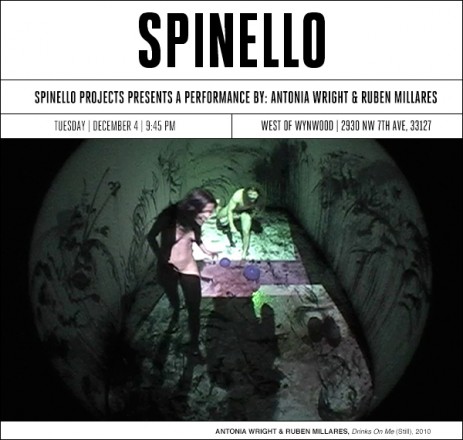 An explosive visual study of the interaction between two people, multidisciplinary artists Antonia Wright and Ruben Millares present Drinks On Me, part of group exhibition, CLOSER — curated by Anthony Spinello at Spinello Projects.. Within a contained, four-walled painted space, the artists will relentlessly throw wine and ink-filled balloons at each other while engaging in dynamic movement. Their playful demeanor set to a dreamy, Baroque-like piano soundtrack is a curious offset to their violent actions. Is this a confrontation? A game? Both?

In the spirit of trailblazing performance artists such as Yoko Ono, Carolee Schneemann, Paul McCarthy, and Joseph Beuys, Wright and Millares utilize messy, visceral objects and impulse responses as the imaginative fuel of their live aesthetic experiment. Within the gallery, Spinello Projects provides the artists with an enclosed installation room that they have transformed into a cave. In a trance-like ritual, the artists will launch balloons at one another; as they burst, one infuses the other with creative energy. The surrounding walls will be lined with peep holes, granting the viewer a fish-eye perspective from the outside in, travelling into this buried world. Accompanying the performance will be an original piano score by Manny Millares, Ruben Millares’ father.

Antonia Wright was born in Miami, Florida in 1979. She graduated from the New School University in New York City with an MFA in Poetry as well as at the International Center of Photography. Recent exhibitions include Trading Places 2 at The Museum of Contemporary Art North Miami, Perfect Lovers (a Frieze New York special project) at the White Box Gallery in New York and Areoplastics in Brussels, Belgium. Other venues in South Florida include Primary Projects, David Castillo Gallery, Dorsch Gallery, The Tampa Museum of Art, The Art and Culture Center of Hollywood, The Frost Museum at Florida International University and The Cisneros-Fontanals Foundation (CIFO). Her work is held in the permanent collections of the Martin Z. Margulies at The Warehouse (Miami), The Hadley Martin Fisher Collection (Tampa), and Marty & Cricket Taplin Collection at the Sagamore Hotel (Miami Beach). Wright and her work have been featured in publications including Art In America, The Miami Herald, El Nuevo Herald, The Art Newspaper, The Sun-Sentinel, ArtSlant and Miami Art Guide. Wright lives and works in Miami.

Ruben Millares was born in Miami in 1980. He received his BFA from Boston College and his MFA from the University of Miami in 2006. Millares’ work has been shown at venues including the Martin Z. Margulies at The Warehouse (Miami), Optic Nerve XIII at The Museum of Contemporary Art North Miami, the De La Cruz Collection (Miami), Salon Adelphi (New York),Perfect Lovers at White Box (a Frieze New York special project), The Invisible Dog Art Center (New York), and the Tampa Museum of Art. Millares was a 2010 resident at Elsewhere Collaborative in Greensboro, North Carolina. Millares and his work have been featured in publications including El Nuevo Herald, The Sun-Sentinel, The Miami Herald, The Art Newspaper and the St. Petersberg Times. Millares lives and works in Miami.

Spinello Projects is a Miami-based contemporary art venture founded by Anthony Spinello in 2005.  It is a gallery, design house, and an innovative platform for nomadic site-specific and curatorial special projects.
Spinello Projects prides itself in exhibiting intelligent works of art in every conceivable medium by local and international artists. Over the course of seven years, Spinello Projects has become a playground for unorthodox and experimental artists not easily placed into the confines of a traditional gallery space. Its mission: to represent, support and collaborate with contemporary artists — initiating  groundbreaking change in Miami’s cultural landscape and beyond.