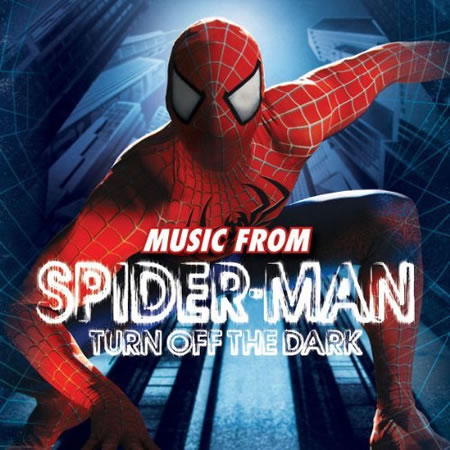 Described by the New York Times as the singing comic book, ‘Spider-Man: Turn Off The Dark‘ delivered an impressive high-flying, Rock N Roll, and unique performance at the Foxwoods Theatre in New York City.

On Sunday, July 24th Gary and I had an opportunity to see Broadways newest and most talked about production. We were very excited about the show because we wanted to witness what everyone was talking about, the aerial and acrobatic techniques, and high flying action. And as a big U2 fan I wanted to actually hear their twist on Broadway’s musical, as we have missed their performance in Miami earlier that month.

Spiderman the undying super hero that remains in the hearts of many–young and old and has been reimagined and reintroduced through various media such as comic books, television shows, and now a mega million dollar Broadway production. The amped up musical comic book was upgraded with quick and slow tempo from the international rock star duo, Bono and The Edge of the rock group, U2.

Dubbed as Broadway’s most spectacular musical, Spider-Man: Turn Off The Dark captured the cartoon effect while maintained a comic book and musical feel. Like one spectator described it, “it was Rock n Roll meets Cirque du Soleil” with technical stage productions and acrobatic swings. We had an exhilarating experience as we were seated stage right in a high action area–the section where Spidey makes sporadic landings, close aerial maneuvers and seldom spewed his gooey mess.

Inside of all of us, there is a Peter Parker ready to leap out; to dream beyond the ordinary with limitless adventures and freedom. The show began at a very slow pace and was not as biting and engaging. This seemed like an attempt to get the audience reacquainted with the back-story/storyline. It needed a heavier musical selection to wake up the performance a bit. The songs were not catchy but were very easy to listen to.

There were moments of chuckles throughout the first part of the play and a bit of surprise for the audience when Spidey made his grand entrance hung from cables extended from the balcony to the stage overhead. He apologized for his tardiness and blamed it all on New York City’s traffic. “Sorry I am late, you wouldn‘t believe the traffic,” he echoed.

Even though the play has received some unfavorable reviews, it still brought out people in droves. Upon arrival at the theatre, we noticed the lobby was packed with what appeared to be tourists, and families with young children. However, once inside the theatre, it was a mixed crowd with couples and a more mature audience seated in the balcony area.The younger audience was definitely enjoying the surprises and the gooey mess seldom spewed out by Spidey at them and his occasional pop-in and out of the crowd shaking hands.

Although the first half of the play was slow paced, part two offered excitement, entertainment, drama, romance and comedy. It was more engaging and interactive. Norman 2.0, the transformation of the mad scientist to the Green Goblin brought laughter and cheers to the theatre. The audience was anxious to see what’s next and the flying action overhead. There were chuckles from the audience when the mad scientist introduced his army of mutant freaks even with a Grace Jones look alike.

The famous fight between Spiderman and his nemesis the Green Goblin was the highlight of the show and audience favorite. This brought the most flying action and laughter from the crowd. As they flew overhead, we were warned not to hitch a ride.

And while we are mixing things up Osborne style, the Green Goblin was very entertaining and extremely comical during his telephone bit with The Daily Bougle Newspaper. He was annoyed and frustrated with the runaround by the machine in an attempt to connect with the publisher at The Daily Bougle. He went through a series of automated prompts before finally reaching the voice mail of the publisher, Ben. No human interaction; just a technology take over.

Don’t expect to hitch a ride or capture images of the acts flying overhead as you will be removed from the theatre and have your cell phones or cameras confiscated. In the words of Norman Osbourne played by Patrick Page, “it would be a $65 million circus tragedy. ”

Despite being marred by numerous setbacks, injuries, unfavorable press, and faulty production, Spiderman turn off the dark is a summer must see and is recommended for the entire family. If nothing else, Spiderman has brought an unprecedented media presence and global interest to Broadway as never seen before. Now everyone wants to see Spiderman fly.