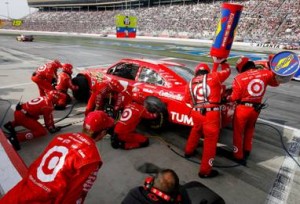 “I know this Target team has it in them if we can just keep the bad luck away from us!”

With 14 races left before the Chase for the Sprint Cup field is set, South Florida-resident Juan Pablo Montoya sits 112 points outside the Top 12 points standings to qualify for the Chase “playoffs,” which culminate with NASCAR’s series-crowning finale at Homestead-Miami Speedway Nov. 21.

“Well we’re hoping for a better result than last weekend’s Showdown race,” said Montoya of the exhibition race in which he was wrecked early. “There is no doubt our cars are fast at Charlotte Motor Speedway; we realized that at the test session earlier this year, and with the strong qualifying and practice run last week. Now if we can get the results to back-up that performance, we’ll be in good shape.”

This year, Montoya has started all 12 races of the Sprint Cup season but has fallen victim to an inordinate amount of engine issues and on-track tangling—which makes the following stat all the more remarkable:

In the six races he has completed, South Florida’s hometown’er has recorded a phenomenal four Top 5s and two Top 10s to sit just 112 points back of the Top 12 Chase cut-off to be eligible for this year’s “playoffs,” which culminate with the 2010 Champion being crowned at Homestead-Miami Speedway Nov. 21.