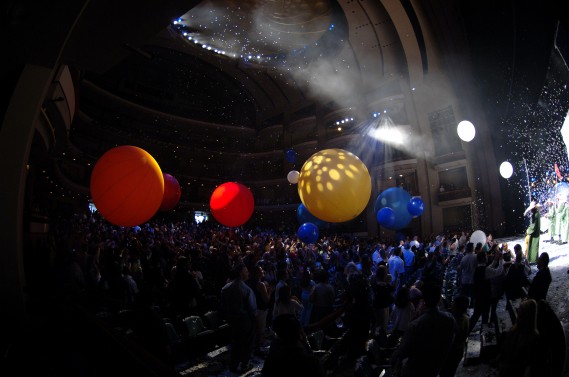 Created and staged by Slava Polunin

“Snowshow is to clowning what Cirque Du Soleil is to Circus!” – Variety

The Adrienne Arsht Center for the Performing Arts of Miami-Dade County proudly announces the return of the smash hit, SLAVA’S SNOWSHOW. The show that stole the hearts of more than 30,000 South Floridians when it premiered in Miami in 2008, returns in July for a limited engagement at the Ziff Ballet Opera House. Tickets to SLAVA’S SNOWSHOW are now on sale.

Often described as a cross between Cirque du Soleil and Blue Man Group, SLAVA’S SNOWSHOW is an awe-inducing theatrical experience and a profoundly moving spectacle full of wondrous images, delightful comedy, haunting music and snow—lots and lots of snow. Created by Slava, the original Cirque clown genius, SLAVA’S SNOWSHOW has “stage effects that are dazzling” (Daily Mail) and a “finale that blows you away!” (Mail on Sunday). Winner of London’s Olivier Award for Best Entertainment and 2005 Drama Desk Award recipient for Unique Theatrical Experience, SLAVA’S SNOWSHOW has been hailed by The Independent as “an unmistakably unique, unmissable comedy masterpiece.” www.slavasnowshow.com

”With the success of our prior summer shows, such as The Donkey Show, Cirque Eloize iD and Fuerza Bruta, the Arsht Center has now established a tradition of offering fun, unforgettable and stunning entertainment throughout the summer months that appeals to all ages, tastes and preferences,” said Arsht Center President and CEO John Richard. “This year, the international phenomenon SLAVA’S SNOWSHOW promises to bring back memories for the 30,000 who loved it in 2008 and make new memories for all who will enjoy this spectacle for the first time this summer.”
Presented by Adrienne Arsht Center and CAMI Spectrum by special arrangement with SLAVA and Gwenael Allan, SLAVA’S SNOWSHOW is the creation of Russian-born Slava Poulin. Inspired by the most famous mime artists of all time, including Charlie Chaplin, Marcel Marceau and Engibaro, Slava has dedicated his life since the age of 17 to re-claiming and re-establishing the art and craft of the true clown. After founding his own theater company “Litsedei” in 1979, Slava has taken clowning out of the circus and into the streets, and from there to the major theaters around the world. Produced by David J. Foster and Ross Mollision, SLAVA’S SNOWSHOW now returns to Miami following sold-out engagements in Buenos Aires, Mexico City, Barcelona, Madrid, London, New York and a record-breaking run at the Arsht Center five years ago.