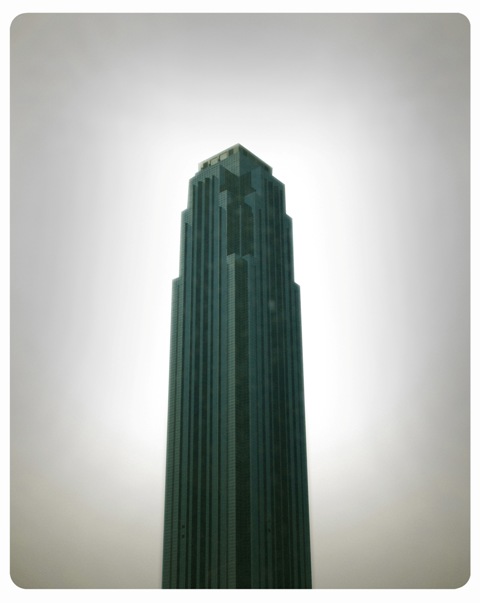 This summer, the Museum of Contemporary Art (MCA) Chicago presents Skyscraper: Art and Architecture Against Gravity, a selection of contemporary artworks that consider the form, technology, myth, and message of the modern skyscraper. The MCA brings this iconic building structure to life in Chicago, a city that is widely known as the birthplace of this architectural type. Over fifty international artists working in the 20th and 21st centuries are featured with works ranging from film and video to painting, sculpture, and photography. Skyscraper is on view from June 30 to September 23, 2012, and is curated by Michael Darling, MCA James W. Alsdorf Chief Curator, and Joanna Szupinska, MCA Marjorie Susman Curatorial Fellow.

Artists and architects, along with writers, filmmakers, and poets, have an enduring fascination with the human and spiritual desire to build farther into the skies, pushing technological limits. The Skyscraper exhibition is organized in sections that consider themes inspired by the skyscraper including: Verticality, Personification of Architecture, Urban Critique, Improvisation, and Vulnerability of Icons – which has a particular focus on the World Trade Center. The centerpiece of the exhibition is a gravity-defying new installation commissioned and built specially for the MCA’s four-story atrium space by renowned Polish artist Monika Sosnowska. Her work, The Fire Escape is a steel structure in the form of a crumbling fire escape that hangs from the atrium ceiling.

In addition to the five thematic sections, the show features solo presentations of work by several artists. Among these is Andy Warhol’s iconic 1964 film Empire — a continuous, static shot of the Empire State Building – and the multi-screen video projection High Wire by Catherine Yass depicting the terrifying attempt of high wire artist Didier Pasquette to walk among three of Glasgow’s Red Road high rise tower blocks. Kader Attia’s Untitled (skyline) is a spectacular arrangement of refrigerators clad in mirrored tiles that emulate the skyline of a dazzling metropolis, with a video by Turkish artist Fikret Atay projected over it. Additionally, presentations of work by Hans-Peter Feldmann, Cyprien Gaillard, and Jan Tichy are featured in the exhibition along with the Monika Sosnowska’s lobby project.

The works in the Verticality section reflect the optimism of the modern skyscraper and iconic buildings, such as Marina Towers and the Chrysler Building. Artist Erica Bohm addresses the skyscraper as an icon of capitalist power, while the work of Roe Ethridge conveys the comfort of looking out from the window of a skyscraper. Featured artists are Jennifer Bolande, Erica Bohm, Chris Burden, Roe Ethridge, Josiah McElheny, Enoc Perez, Tony Tasset, and Peter Wegner.

The works in this section straddle the human and the architectural, from Vito Acconci’s High Rise where the visitor’s action can raise the phallic-like structure of the high rise, to Abelardo Morell’s work using a camera obscura to project an image of the Empire State Building on a bed.

These works look at modern architecture with a critical eye to temper the utopianism of the cult of the skyscraper with its dystopian brother. Works by artists such as Shizuka Yokomizo and Michael Wolf show how the complex promise of modern housing is negated for the inhabitant by feelings of alienation, melancholia, and a loss of the distinction between public life and privacy.

Improvisation offers a fun look at the ways that modernist architecture is humanized by the people who inhabit it, from Yin Xiuzhen’s soft cityscapes made of fabric that dramatically unfold from suitcases, to Marie Bovo’s photographs that give a sense of falling into interior courtyards in housing blocks.

This section presents artworks that consider our changing relationship to iconic structures of power, post-9/11. This is the first time that Robert Moskowitz’s minimal paintings of the World Trade Center’s twin towers have been shown since 9/11, while Hans-Peter Feldmann’s installation Frontpage 9/12 displays the front page of 151 newspapers from September 12, 2001.