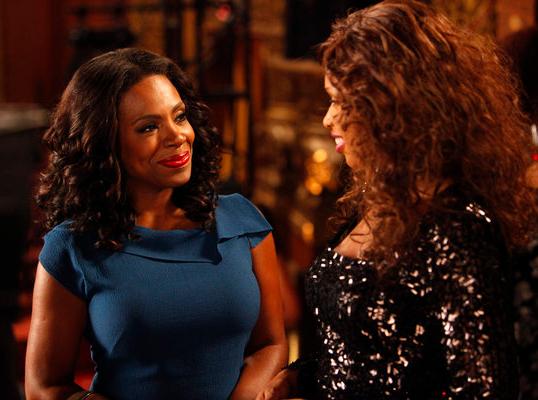 Sheryl Lee Ralph is known for both her beauty and talent. However, as of late what has caught the notice of the public eye is the number of successful young women in the entertainment industry that she has a screen connection with in the role of a mother. The Jamaican-American singer, actress, and activist recently guest starred on NBC’s hit musical/dramatic series Smash where she played Cynthia Moore, the mom-manager of Veronica Moore who played by Jennifer Hudson. And Premier Guide Media had an opportunity to talk with her.

It is no secret that Broadway is a youth-based culture, and even Ralph acknowledges, “it has never not been a youth-based culture,” however, what is interesting is that in many ways it is also a culture that honors lineages. Whether it is blood lineages (like the Barrymores) or artistic/creative lineages, such as the one seen on Smash with Ralph and Hudson, there is always a place for tribute to those that have come before.

In the past several years, Sheryl Lee Ralph has been associated with a handful of young and prominent female entertainers. According to Ralph, “When I really looked at all of the young women that I’ve played mother to, it’s an incredible group of talent…there was Brandy on Moesha. Before Brandy there was Sister Act 2 and my daughter was Lauryn Hill…I just wrapped a pilot with Tia Mowry and [now I am] the mom for Jennifer Hudson. So my God, if you consider the four of them it’s an incredible group of young women and all of these mothers [that I have played] are so very different.”

While it may seem far stretched to call the creation of the mother-daughter relationship on Smash a lineage, it really is just that. Ralph’s casting as a Veronica Moore’s mother is partly a result of genius casting, however Ralph was not searching for this role – it was in search for her. Ralph recalls, “…when they called me in they said, ‘Look, are you interested in playing the (momager) to Jennifer Hudson on Smash?’ And this was coming from my agent. I told my agent that is not funny, do not punk me, and I hung up the phone. I hung up the phone! He called me right back and he said, ‘No, no, no. I’m serious. They’re offering you this like right now. Do you want to do it?’”

While Ralph has felt in some ways she has been shut out of things and has had limited opportunities, it is clear that she plays the role of a mother well and has done so time and time again over the course of her career. When asked to explain this phenomenon, Ralph flows wisdom, “I think because I’ve had an excellent example of a mother in my life and it’s not just a mother as a mentor, female mentors in my life [I play this role well]. I often write in my book, Redefining Diva, the women that came before me were so wonderful in sharing what they had learned with me that it just – oh it just helped me in ways that I see coming true now about holding on in times of disappointment, celebrating in times of true happiness. Those are learned things. Those are learned choices, the choice to be happy no matter what is going on. I have a great mother in my own mother, a strong West Indian woman, Jamaican to be exact, and I had an incredible grandmother from the south. Both sides of my family were full of the most incredible women. So I really think my ideals of motherhood come from the mothers that have been placed in my life.”

In regards to her challenges, Ralph claims to also write about it in her book, Redefining Diva. “Life is full of challenges and as a woman, just [a] plain old woman; there are always challenges in moving forward in life. But then often you talk about show business or business, any kind of enterprise period and you add color on top of it, it gets even harder.” Despite these challenges, in many ways Ralph has flourished and perhaps it is this strength she exudes that makes her such a compelling role model to young females in all facets of the entertainment industry.

When Ralph first walked into her dressing room on the set of Smash, what awaited her was, in her own words, one of the “hugest, grandest and most beautiful arrangements of flowers [she] had ever seen.” These were a gift from Jennifer Hudson. While Ralph tried to thank her co-star for the gift, it was evident that the feelings of feeling privileged were reciprocated. According to Ralph, Hudson responded, “Miss Ralph, you don’t have to tell me ‘thank you’ for anything because you are all that I ever really wanted to be.”

Some lineages are birth right, others are by creative choice. But in the entertainment industry, it is clear that Ralph’s impact can be seen in the faces of today’s young stars.