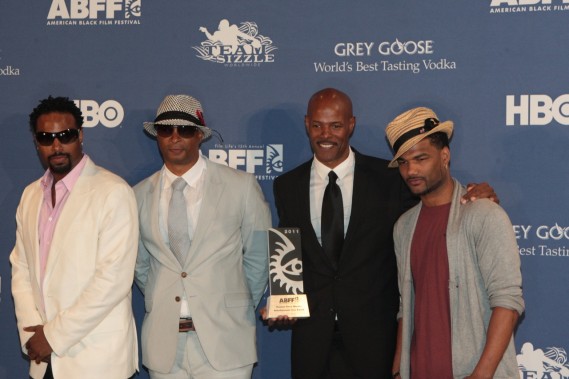 The Comedy Club at the newly expanded Seminole Hard Rock Hotel & Casino Hollywood will feature a star-studded line up in February. Actor, writer, producer and comedian Shawn Wayans will perform live for multiple shows Feb. 21 to Feb. 23. Joining Wayans next month is Steve Rannazzisi who will be headlining the Big Game weekend Jan. 30 to Feb. 1, Harland Williams Feb. 5 to Feb. 8, Carlos Mencia Feb. 13 to Feb. 16 and Steve Treviño Feb. 27 to March 1.

Tickets are on sale now. Guests at The Comedy Club must be at least 18 years of age. The Comedy Club has a two-drink minimum per ticket (non-alcoholic drinks qualify). For more information or to purchase tickets, please visit www.hrcomedyclub.com.

Shawn Wayans made his acting debut in Keenen Ivory Wayans’ film, “I’m Gonna Get You Sucka” in 1988. Following Wayans’ feature film debut, he joined the cast of “In Living Color” and later began co-writing a string of blockbuster movies including the hilarious horror spoofs, “Scary Movie” and “Scary Movie 2.” Wayans also co-wrote, co-executive produced and starred in “White Chicks” and starred in the film “Dance Flick” and co-wrote “Little Man.”

For more than 13 years, from the stage to the silver screen, Steve Rannazzisi has made audiences laugh. Rannazzisi is known for starring and writing for the critically acclaimed FX Network comedy series, “The League.” His standup has appeared on Comedy Central’s “Premium Blend” and the standup special “Pauly Shore & Friends.” Rannazzisi has appeared on the television shows “Punk’d,” “Big Day,” “State of Romance,” “Love Bites,” “Trust Me,” Outsourced” and his own web series “Daddy Knows Best.” Rannazzisi has appeared in the films “See Jane Run,” “Kitchen Confidential,” “Samantha Who?,” “Paul Blart: Mall Cop,” “Imagine That” and “For Your Consideration.”

Comedian and actor Harland Williams is known for his hilarious movie roles, outlandish stand up and sketch comedy routines. Williams has starred in unforgettable roles in films such as “Dumb and Dumber,” “Something about Mary,” “Half Baked,” “Rocketman,” “Sorority Boys,” “Down Periscope” and more.  A master of both stand up and sketch comedy, Williams’ incredible shows are not to be missed.

Carlos Mencia found success on the L.A comedy circuit and was named “International Comedy Grand Champion” from Buscando Estrellas (the Latino version of Star Search). This led to appearances on “In Living Color,” “The Arsenio Hall Show,” “Moesha” and “An Evening at the Improv.”  Mencia starred in his own show “Mind of Mencia” on Comedy Central and has also been featured in the films “The Heartbreak Kid” and “Our Family Wedding.”

Steve Treviño is considered one of the country’s hottest comics. Treviño has made memorable appearances on “The Late Late Show,” “Comics Unleashed” and “BET Comic View.” He also wrote on “Mind of Mencia,” and produced and wrote on rapper Pitbull’s “La Esquina.”  Treviño’s standup specials include “Grandpa Joe’s Son,” “Relatable” and “‘Til Death, Treviño.”

The Comedy Club is South Florida’s premier venue for stand-up comedy and hosts acclaimed comedians weekly, including top-name talent recognized on TV and streaming platforms. The new 400-seat venue offers a variety of seating including plush couches, family-style tables and highboys, and a full bar with light food options.