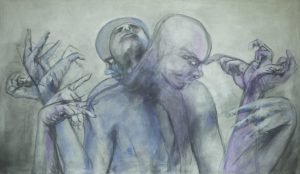 Avant Gallery is pleased to present a new series of paintings by Colombian-born artist Santiago Betancur. Santiago Betancur: The Indigo Series will feature, as its name implies, the artist’s introduction of blue hues to his color palette, along with neighboring shades of violet and green.  The collection is comprised of contemplative works of self-portraiture painted with iridescent, metallic pigments.

One may argue that all art is existential in the sense that it is definitive of the artist’s state of existence at the time of creation. The utility of such an assumption is the reward of witnessing the growth, decay and fluctuation of the artist through time.

In May of 2008, Colombian artist Santiago Betancur, left his birthplace of Medellin, Colombia, and settled in Miami.  The cultural adjustments and language barrier wore thin the artist’s initial excitement for his new home. Feelings of isolation and hopelessness began to dominate Betancur’s life, and, naturally, seeped into his work. Using a mixture of acrylic paint and pure water, Betancur worked on life-size figure paintings that can only be described as a synthesis between   Da Vinci’s anatomical sketches, Goya’s Black Paintings, and of course, the undefined substance of Betancur himself. The artist adorned canvases with the embodiments of his despair – dark, skinless figures, dripping with blood and shreds of a human soul. Grotesque, graceful and strong.

Two years have elapsed, and Betancur’s newest work, The Indigo Series, currently on view in the West Wing at Avant Gallery, represents a new chapter in the artist’s life.  Still using the human shape to represent his themes, Betancur enters a time of interference* blues, violets and greens; a time to embrace the paradox of freedom while belonging to a place.

The frontispiece of the exhibition depicts the figure of a man, layered and duplicated. The artist taps into an intellectual and emotional need to reconcile the many dimensions of the self within oneself, and within a universe one can only attempt to navigate. The opalescent effect of the interference color gives the impression of an unstable, living image. Hands and fingers move thoughtfully, freezing in mysterious gestures as the blind eyes search above, below, and within.

* interference color – acrylic-based, colorless transparent paints made from titanium coated mica flakes rather than traditional pigments. They change their color (exhibiting a metallic look and color shift) depending upon the viewing angle. As the light hits the mica flakes, it either bounces off directly, reflecting the labeled color, or passes through to another layer and bounces out at a different refractive index displaying the complimentary color. The effect is visually similar to a thin coat of oil floating on water.

Simplicity plays a major role in defining Betancur’s new style. Rough, yet purposeful, black lines define a male torso.  Arms stretched out behind him, his chest stands strong against the winds of change.  Icarus spreading his wings for the first time, but this man has no need for wings as he assumes the pose of freedom. With the conviction that liberation of his spirit is now in his own hands, feathers and wingspan are obsolete.

In addition to adopting a new palette, the artist has decided to experiment with painting on a smaller scale. Accompanying the life-size figure paintings are a series of smaller, more abstract pieces. “These are about communication between man and the universe. Energy flows back and forth, creating shapes and bursts of color”, the artist explains. Again, the opalescence in the pigment creates a sense of motion; the flow of energy can not only be seen, but also felt as it reverberates through the gallery space.

Betancur’s new work speaks of a man who, through his personal struggle, has connected to something much greater than himself, and, most importantly, he shares it in a way more compelling than words can relay. His experience and evolution become the viewer’s own as one allows the spirit of existentialism connect to an innate desire for freedom, flight, and communion with the higher self.

The success of this exhibition lies in the artist’s natural capacity to disrupt the viewer’s sensibility with one line, one mind-bending stroke, taking an experience from his personal unconscious directly into the collective unconscious of the human experience.

Santiago Betancur: The Indigo Series is running now through May 15th. Gallery hours are Monday through Friday, 11 a.m. to 6 p.m., and Saturday, 12 p.m. to 6 p.m. The gallery is closed Sundays and holidays. For more information please contact Vanessa Almerico at 305.573.8873 or valmerico@avantgallery.com