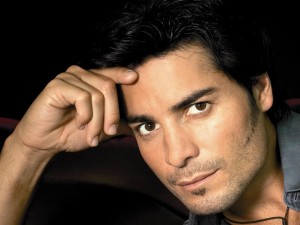 After three years away from the spotlight, Chayanne – winner of the 2010 Premio Lo Nuestro “Excellence Award” – returns to the stage in support of his latest recording and 14th studio album, “No Hay Imposibles,” released earlier this year. The album, recorded between Miami, Puerto Rico, Los Angeles, Bogotá and Buenos Aires, features the hit single, “Me Enamore De Ti,” which serves as the main theme to the popular Mexican soap opera, Corazón Salvaje.  On this album, Chayanne worked with general producer Javier Díaz and with other renowned industry veterans such as Julio Reyes, Sebastián Krys, Pablo Durán and René Toledo. “No Hay Imposibles” is already certified gold in Argentina, Venezuela, Mexico and the U.S.

Puerto Rican-born Chayanne (aka Elmer Figueroa-Arce) began his career at age ten with a musical group called Los Chicos. Since then, he has sold millions of albums earning more than 70 platinum and gold records and has received two Grammy nominations and an MTV Award for Best International Video. He has had more than 17 top ten hits on the Billboard charts.

Named one of the “50 Most Beautiful People in the World” by People Magazine, Chayanne’s talents extend to the silver and small screen where he starred in several roles. In 2009, the artist returned to acting starring in a TV miniseries, Gabriel.

Despite his busy schedule, Chayanne lends his voice to those less fortunate. He is an appointed Ambassador to the United Nations for the Immigrants Foundation and serves as an envoy to the High Commissioner for the United Nations World Refugee Organization. His concern for children led him to become the Hispanic spokesperson for the Starlight Foundation, whose mandate is to grant the wishes of terminally ill children. His native country even named a road after him – a highway that connects San Lorenzo with Gurabo, formerly known as PR-203. Chayanne also spends his time promoting up-and-coming talents, such as young Venezuelan composer Paolo Tondo, author of “Me Enamore De Ti,” among other songs.