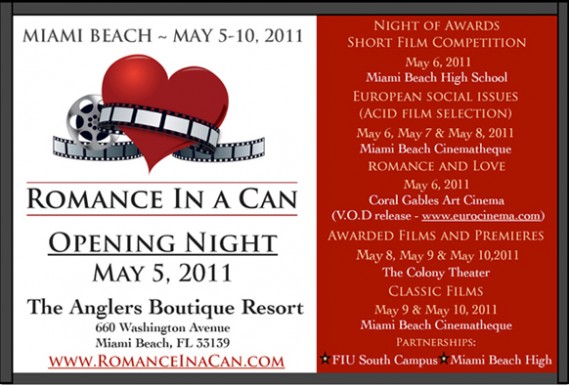 “Romance In A Can” Film Festival, presented by Red Chemistry, Inc., has earned a reputation for bringing the finest European romance films to U.S. audiences since 2006. This year, the film festival will run from May 5 to May 10, 2011 and will showcase its film program at various South Florida locations including the Colony Theater, Miami Beach Cinematheque, Miami Beach High School, Alliance Francaise, Coral Gables Art Cinema (in collaboration with the Video on Demand Channel eurocinema) and Florida International University’s Modesto A. Maidique Campus.

About the film programming: During the 2010 Cannes Film Festival, ACID (Association for the Distribution of Independent Cinema) presented a selection of nine acclaimed international full-length films including Into Our Hands, Cuchillo De Palo, Donoma, Fix Me, Flowers of Evil, Chicks, Pursuit, Robert Mitchum is Dead and The Drifter. This year, Romance in a Can has the pleasure of presenting the same nine feature films from the ACID Cannes selection in Miami. Created in 1994, ACID’s mission is to give visibility and public release to new talents in the film industry. In partnership with 35 festivals, ACID presents movies in France (Paris, La Rochelle, Lussas, Pau, Belfort) as well as abroad (Montreal, Bratislava, Tübingen, Linz, Prague, Lisbonne, Pesaro) and now Miami.

Ticket prices vary from $8-$12 depending on venue. For a complete screening schedule, please visit: www.romanceinacan.com

A donation is suggested

A donation is suggested