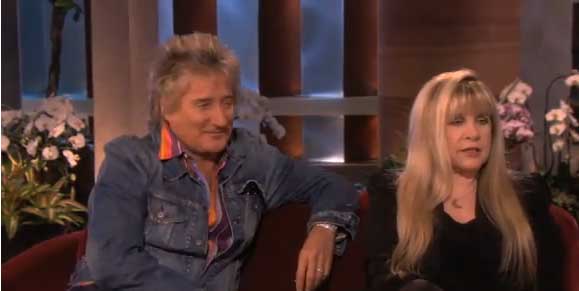 Rod Stewart and Stevie Nicks, two of music’s most legendary forces, are uniting for one of the most anticipated rock & roll events of the year – THE HEART & SOUL TOUR – coming to Sunrise, Florida on March 20.   The tour will feature both artists performing rock & roll sets from their incomparable catalogs of hits and backed by an incredible band of musicians and stage production.

Tickets will go on-sale Friday, January 21 at 10:00 am and can be purchased at on-line at livenation.com, all Ticketmaster outlets, or charge by phone 800-745-3000.  Additionally, American Express Cardmembers will have an opportunity to purchase tickets in advance of the public on-sale date beginning Tuesday, January 18th at 10 am by visiting Ticketmaster.com. Tickets are subject to applicable service charges and event time and date are subject to change.

Said Rod Stewart: “I’m excited to hit the road with Stevie.  We are looking forward to giving our audiences an evening of pure rock & roll music. I’m already thinking about which of my old favourites to bring back and vocally, I think we’ve both begun thinking about which songs might be great fun and well-suited for a duet or two.”

In a career spanning five decades, with an estimated 250 million album and single sales, Rod Stewart is a Rock and Roll Hall of Famer and indisputably one of the most successful performers of all time. 2010 saw Stewart at the top of both the touring and album charts – highlighted by his critically-heralded, sold-out first run of concerts at The Colosseum in Las Vegas, a “Boxscore,” chart-topping, 33-date European summer tour which included 4 sold-out dates at London’s O2 Arena.  Throughout his prolific career, he’s garnered16-Grammy nominations, including his current for “Best Traditional Pop Vocal Album,” and sales of more than one million albums worldwide for his 2010 album FLY ME TO THE MOON…THE GREAT AMERICAN SONGBOOK, VOLUME V.  In addition, Rod Stewart is set to release THE BEST OF…THE GREAT AMERICAN SONGBOOK available in stores February 1st, 2011 (J Records).

Stevie Nicks, Rock and Roll’s reigning queen, will be releasing her highly anticipated new CD IN: YOUR DREAMS on May 3, 2011. The new album, her first album of new material in a decade, was co-produced by former Eurythmic Dave Stewart and Glen Ballard. The new album is now available for fans to pre order at stevienicks.warnerreprise.com.  Fans who pre-order the CD will receive an instant download of the record’s first single, the Nicks’ penned “Secret Love”. The official release date of the single is February 3rd. Nicks is a multi-Grammy Award-winning, multi-platinum, Rock & Roll Hall of Fame inductee and member of Fleetwood Mac.

Rod Stewart and Stevie Nicks announced their plans to join forces for THE HEART & SOUL TOUR on The Ellen DeGeneres Show on Thursday, January 13.  Fans can log-on to (ELLEN link) to watch highlights of their interview and performances.   For updated information about the upcoming tour, albums and more visit rodstewart.com and rockalittle.com.