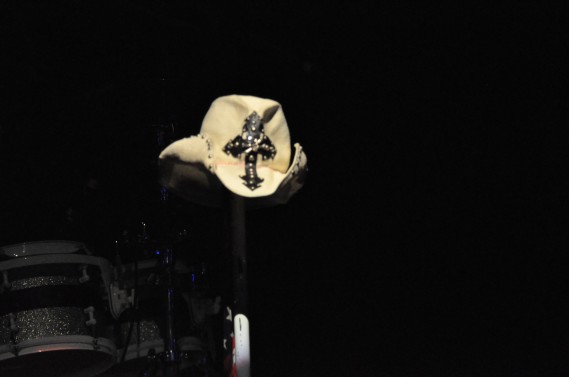 In signature Bret Michaels fashion, a single microphone with a hat atop sits centerstage awaiting his grand entrance. Bret Michaels has returned to Miami–this time to promote his new album, Get Your Rock On which was released in early 2012.

Fans of both Bret and Poison came out to watch the group’s frontman perform solo at the Seminole Hard Rock Casino and Resort, Hollywood, Florida.

Although we have seen Michaels in the past in West Palm Beach and at a tailgate party at The Sunlife Stadium in Florida, we were excited to attend his Hard Rock appearance. His gigs are always raw, in your face and all about the music. He celebrates the highs and lows of his life through his music while allowing his fans to experience it all with him.

He went back to the beginning of his career, to the days with Poison. We rocked to Talk Dirty To Me from the Look What The Cat Dragged In album which was one of Poison’s first international hit. Every Rose Has It’s Thorn, one of his most popular hits, has been revived with a new collaboration with Loretta Lynn, on his latest album, was among hits performed.

2012 is shaping to be a busy year for the artist. While promoting his newest album he will rejoin Poison on their summer tour. He said he was looking forward to getting the band back together. He has also added designer to his name and will extend his new line of guitars from Dean Guitars.

Michaels has never won a Grammy, but is definitely one of the hardest working musicians in the industry and will continue to rock on with his in your face rock and roll style.