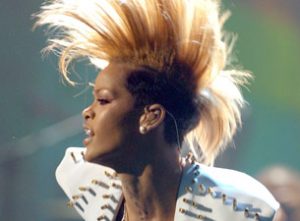 Grammy winner Rihanna proved once again that she is an extraordinary live performer after delivering two of the most captivating performances at Sunday night’s Grammy Awards telecast with fellow nominees Drake and Eminem. Rihanna today announced that the incomparable Atlanta singer, songwriter, rapper and fellow show stealing performer Cee Lo Green will join her on the highly anticipated LOUD summer tour. The tour, produced by Live Nation, is scheduled to begin on June 4th in Baltimore.
Ten additional dates have been announced for a total of 17 confirmed dates for the North American leg of the LOUD tour thus far. Additional dates include Montreal, Winnipeg, Saskatoon, Calgary, Edmonton, Vancouver, Houston, Dallas, Albuquerque and Boston with more to be announced soon. Tickets for the newly announced shows go on sale beginning Friday, February 18th in select markets at Ticketmaster.com and LiveNation.com.

“I’m a huge fan of Cee Lo since his days with Goodie Mob and with Gnarls Barkley. He’s a musical genius, continually reinventing himself and I’m thrilled to have him join me on tour,“ said Rihanna. “I want to thank Rihanna for inviting me on our version of 50 First dates, only difference is she’s unforgettable fine. Don’t tell her I have a crush on her, don’t wanna mess everything up. But honestly it’s an honor and a blessing to be able to go out with a talent such as hers and I look forward to doing my part to make the tour unforgettable for the fans that come out and see us,” adds Cee Lo.
Rihanna and Cee Lo both won Grammy Awards on Sunday Night with “Only Girl In The World,” being named best Dance Record for Rihanna and Cee Lo won Best Urban/Alternative Performance for “Forget You.” Cee Lo set the blogosphere on fire again with the Grammy Awards’ performance of his smash nominated single “Forget You” with Cee Lo decked out in colorful feathers and bedazzled featuring special guest Gwyneth Paltrow and an assortment of unforgettable muppets as his backing band and dancers. “Forget You” is the first single from Cee Lo’s third album CEE LO GREEN THE LADY KILLER which was released this past November. The song became a viral video phenomenon in the social media space prior to being nominated for a Grammy Award this year. Cee Lo began his career as part of the renowned and influential Atlanta hip hop group Goodie Mob prior to breaking out on his own as Cee Lo Green. Cee Lo released his acclaimed debut solo album CEE LO GREEN AND HIS PERFECT IMPERFECTIONS in 2002 to incredible critical applause and followed up in 2004 with CEE LO GREEN IS THE SOUL MACHINE. Cee Lo is also part of the superstar duo Gnarls Barkley with heralded alternative music producer Danger Mouse, whose debut album featured the genre crossing global hit single, “Crazy.”
Rihanna’s third single “S&M” follows the #1 hits, “Only Girl” and “What’s My Name” both reaching the top of the singles charts. The new video for “S&M,” directed by Melina Matsoukas, premiered on February 2nd showing fans Rihanna will continue to push the envelope of creativity.