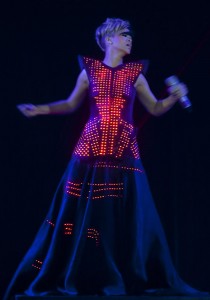 Rewind to summer of 2005, when I first saw Rihanna in concert in Long Island, New York performing at the Y100 summer series concert. At that time her newest single “Pon de Replay” was the summer’s anthem, and Rihanna Fenti, the Barbados native was just introduced to prime time.

Fast Forward to 2010, from New York to Miami, it’s now five years later, and Rihanna has graduated to international super stardom headlining her own tours, and performing with an incredible level of maturity. The multi-platninum and Grammy award winning superstar took the stage at the American Airlines Arena in downtown Miami in high excitement to a full house.

She performed a string of fan favorites, including “Russian Roulette”, “Love the Way You Lie”, “Rude Boy”, “Umbrella”, “Unfaithful” among others.

“Rude Boy”, a Dancehall anthem, with strong Caribbean and Reggae influences was a favorite among the crowd. There were also other elements that reflected her island roots, such as the stilt walkers(common theme for bacchanal throughout Barbados and the Caribbean) on stage during “Diturbia“, her dance moves and the very color of her hair.

Her stage performance and set up was like a mini movie set with a weird twist of princess themes, such as the pink tanker that was anchored stage right, which she straddled the extending gun barrel at one point in her performance. It was definitely a night of big guns; back up dancers at times were elevated to the ceiling on huge guns on both sides of the stage, at one point in the concert she mounted one herself. Her costume choices included, inflatable and futuristic outfits with florescent lights, fishnets, latex catsuits, the signature hairdo with red on top, platforms and thigh high boots.

From the moving platform to the disappearing act, Rihanna dazzled her fans with an amazing performance. Her performance was exciting, engaging and provocative at times, I am tempted to call her Crotch-Grabbing Rihanna. The album is titled Rated R, however the audience included fans from age 5 to 60 years old.

As for surprises, she treated us with a taste of what she learned in her drum lessons with Travis Barker. A fan was invited on stage to share the spotlight in the banging of the car at the end of the “Shut Up and Drive” song. Another surprise was Jamaican reggae superstar, Baby Cham who was seated immediately behind us. Baby Cham recorded “Boom Boom” (from the Ghetto Story Album)with Rihanna in 2006. He took his family backstage for a meet and greet with Rihanna.

Not forgetting the Latin community and fans in South Florida, she sang “Te Amo” (Rated R, 2009) which was a lovely treat with her attempting some pseudo Latin moves.

After performing “Take a Bow” from the Good Girl Gone Bad album, she left the stage; what most people thought was her last song, many of the fans started exiting the stadium, but the die-heart fans who screamed and stomped were rewarded with an encore that included a wardrobe change and a slew of favorites from her previous albums, including “Umbrella”.

Last night was a treat, and Rihanna proves she is a rock star riding big guns with her black guitar. She ended the show after “Umbrella” with rains of red confetti against her black and white costume.

Should Rihanna career continue at the height it is today, I do believe she is geared to become the next Beyonce. She has incredible sex appeal, and strong entertaining stamina.

I cannot dismiss Ke$ha as she was also very entertaining in her own way. She was a rebellious one.

“Rock on with the last Bitch on earth!” -Rihanna