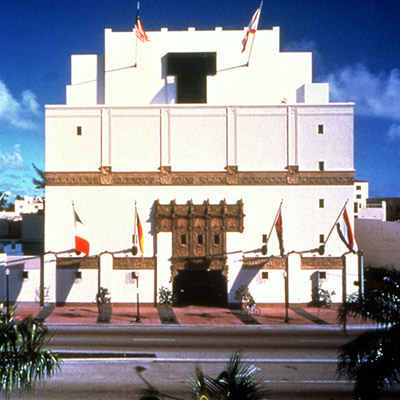 The Wolfsonian–FIU will join Florida International University to mark the tenth anniversary of the events of September 11, 2001 by drawing from its rich collections of works and unveil Reflections on Loss and Commemoration, an installation of objects on view September 8 through September 30, 2011. The installation is part of a larger university-wide initiative commemorating the tenth anniversary of the tragedy and culminating with a series of events held across the various campuses at FIU during the month of September.

Reflections on Loss and Commemoration explores how humans record and commemorate disaster, tragedy, and loss through the visual arts. “The unveiling of this installation is an opportunity for The Wolfsonian to put into an historical perspective responses to tragic events, such as those of September 11th,” notes Marianne Lamonaca, The Wolfsonian’s associate director for curatorial affairs and education. “Often artistic works are able to express thoughts and feelings that are beyond everyday expression. Through its collection and programs the museum provides a place where the community can come together to reflect on a broad range of issues, especially difficult ones.”

In addition to the installation, The Wolfsonian will present Harun Farocki’s film, Images of the World and the Inscription of War (1989, 75 minutes) on Sunday, September 11 at 4pm. Thematically rooted in the double meaning of Aufklärung—the German word for both enlightenment and aerial surveillance—Farocki’s film maps the hazy distinction between imaged event and lived experience in a world of technologically mediated vision. It traces the effect of imaging technology on human thought and action, illustrating how the representation (the virtual) and the thing itself (the actual) tend to converge wherever perception is subject to the selective sight lines of the camera.

To conclude the month-long commemoration, Senator Bob Graham, the former two-term Governor of Florida and eighteen-year US Senator will discuss his suspenseful novel, The Keys to the Kingdom (Vanguard Press, 2011) on Saturday, September 24 at 1pm. In the novel, a former Senator and co-chair of the Congressional Inquiry Commission who is following an explosive New York Times op-ed piece about the 9/11 investigation is found dead near his Florida home. Graham’s novel “delivers uncommon insight into the treacherous and sometimes frantic craft of intelligence gathering [and] reads like a true story because Graham knows where the truth lies,” claims New York Times bestselling author Carl Hiaasen.

Both events are free and open to the public. For more information about programming offered in conjunction with the installation, contact 305.535.2644 or programs@thewolf.fiu.edu.