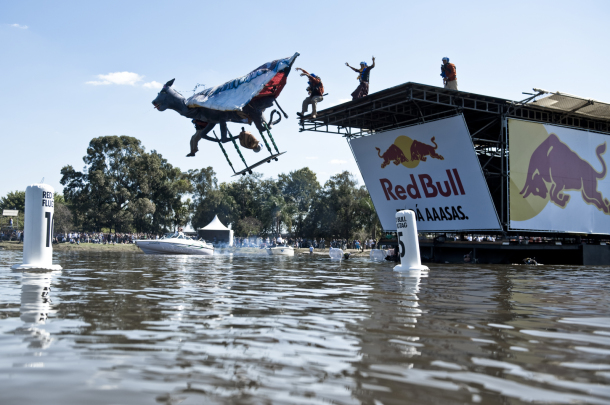 Red Bull Flugtag is kicking off 2010 with some heat, returning to Miami’s Bayfront Park where in 2004 the crowd was treated to an airborne tiki bar, a pirate ship with wings and even a flying empanada. Miami’s nonstop energy and taste for flare will be a sight to behold at this outrageous flying competition on July 10th. This won’t be Red Bull Flugtag’s first cruise in Miami’s coastal waters, having splash-landed here in 2004, but the memorable crafts, the wild crowd and the city’s taste for flare drew this outrageous competition back to Miami’s waterways. This July 10th, more than 30 teams from across the Southeast will test the limits of human-powered flight in front of thousands at Bayfront Park before splashing into the waters of Biscayne Bay below. For more information, please visit www.redbullflugtagusa.com.

Red Bull Flugtag challenges the brave and brainy to design, build and pilot homemade flying machines off a 30-foot high flight deck in hopes of soaring into the wild blue yonder…or often, plunging into the waters below.  Flugtag, which means “flying day” in German, pushes the envelope of human-powered flight, but competitors need more than airtime to reach the podium. Teams are judged on three criteria: flight distance, creativity of the craft, and showmanship.  This criteria has inspired flying tacos, prehistoric pterodactyls, winnebagos with wings and even Snoopy and the gang to grace the Flugtag flight decks! And after a year with no Red Bull Flugtag in the U.S., 2010 promises to be bigger and better than ever.

Since the first Red Bull Flugtag took place in Vienna, Austria, in 1991, more than 40 Flugtags have been held around the globe, attracting up to 300,000 spectators for a single event.  The record for the farthest flight-to-date currently stands at 195 feet and was set at Red Bull Flugtag Austria in 2000.  A new U.S. record was set in 2007 at Red Bull Flugtag Nashville when a flying banjo flew 155 feet!