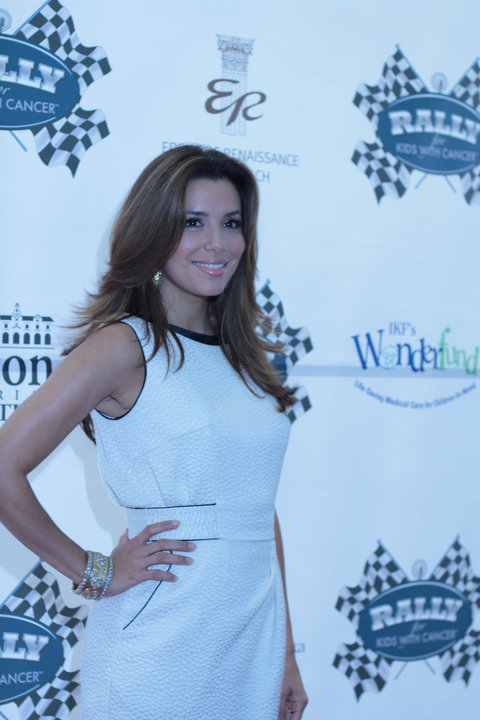 Eva Longoria, Actress “Desperate Housewives”, philanthropist and Honorary Chair, got the excitement revved up for the second annual Rally for Kids with Cancer Scavenger Cup in Miami, hosted by Eden Roc Renaissance Miami Beach, along with Loren Ridinger, Senior Vice President of Market America, resuming her role and JR Ridinger, President and Chief Executive of Market America joining forces with his wife as Event Co-Chair.

Rally for Kids with Cancer is ignited by the desire to assist fiscally responsible pediatric cancer organizations within the Miami area in their fight to help end kids’ cancer. The highest participating fundraiser for the second year in row was Team Market America, driven by JR Ridinger with an astounding $91,390.00. The winning team of second annual Rally was Team Market America 2 lead and navigated by Amber Ridinger, Duane Mclaughlin and Michael Yo, E! News Correspondent.

The Rally for Kids with Cancer Scavenger Cup raised over $450,00.00 to benefit theRally for Kids with Cancer Foundation, Cancer is the most common cause of death by disease for children and adolescents in America.  In 2010, an estimated 12,400 children between the ages of birth and 19 years of age were diagnosed with cancer in the United States. About one in 300 boys and one in 333 girls will develop cancer before their 20th birthday.

“Launched in 2008, the Rally for Kids with Cancer events have achieved incredible success, raising over seven million dollars for foundations across North America. Partnering with several worthwhile and world renowned foundations, we continue to battle children’s cancer by providing much needed funds to these charities and, most importantly, giving hope and inspiration to the children who are currently fighting for their lives,” said Joel Hock, founder of the Rally for Kids with Cancer Foundation.

On April 30th, Honorary Chair Eva Longoria  started the Rally by dropping the checkered flag at the “Start Your Engines” brunch at the Eden Roc Renaissance Miami Beach.  Drivers, along with their Celebrity navigator received tips and clues to maneuver through the Miami area. The most important pitstop was at Holtz Children’s Hospital where drivers and celebrities were able to interact with the kids currently battling cancer. Activities included them having their face painted by a child, cupcake decorating and tic tac toss. The other fun pit stops occurred at Miami Seaquarium,  SWIM with a DOLPHIN and throw a football against a MIAMI DOLPHIN Alumni; Miami Executive Aviation/Experience Aviation where Barrington Irving was our Celebrity Pilot and took the teams on an experience of a lifetime!  One member of each team got to drive a plane down the runway while the other team members sat in the back.  Here’s the twist:  The driver was blindfolded and needed the help of their teammates to guide the plane. LaGorce Country Club where they got to test their skills on the green with a special twist on putting…pool style; STK RESTAURANT, where they had to create the perfect STK sauce and burger from scratch, with the final stop being the Rally gifting suite.

The evening ended at “The Winner’s Circle Jeans & Jewels gala” a star-studded evening at the Eden Roc Renaissance Miami Beach, complete with decadent food and cocktails courtesy of GREY GOOSE Vodka, a one-of-kind live auction that included: two of the hottest tickets in town to one of the most watched reality TV shows “Dancing with The Stars”; Ultimate fashionsista experience – two VIP tickets to LUCA LUCA Runway show in New York City and backstage access to meet the designer Raul Melgoza and get a consultation and $1,000 gift certificate; a breathtaking one of a kind 22.62 carat square step cut pink tourmaline and 18 karat white gold ring, designed my Miami’s premier jeweler Ring Finger Studio; Two first class tickets and a stay at the luxury Renaissance Hotel in Paris.  The night finished off with award-winning entertainment by IYAZ.

Rally for Kids with Cancer.  Together, we can make a difference!