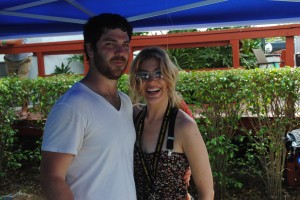 At the recent Country Throwdown Tour in West Palm Beach, I caught up with Emily West to discuss her stage moments on tour, and her experience as an emerging singer/songwriter.

Emily West is a lucky girl. She refers to herself as the psychotic funny pants, but no psycho gets the opportunity to record with Keith Urban. West is an emerging singer/songwriter with a promising future. She was recently signed to Capitol Records. West also made several television appearances including the Celebrity Apprentice and Are You Smarter Than a Fifth Grader, where she won $25, 000 for charity.

West is definitely one to watch.

PGM: Hi Emily, I am Daedrian McNaughton with Premier Guide Miami, the pulse of Miami’s entertainment, and lifestyle. Whatever you say here will actually appear on the website in a written format….

Emily West: Meaning we have to watch our mouth…

PGM: You had a Patsy Cline obsession when you were a child. Have you grown out of that obsession?

Emily West: Absolutely not, I still worship her-I still listen to her for inspiration and that’s how i learned how to sing. I still have the cassette tapes I learned from over at my mom’s. I was doing some laundry at my mom’s house and I saw the cassette tape.

So how often do you sing her songs, now?

Emily West: All the time-when I was in the bathroom curling my hair working on the perfect pin curl…..

Emily West: Nooooooo…not all that time-I sing it in the car when I am getting ready for-Oprie show-I am always singing her. I warm up to Patsy.

PGM: Was Patsy your inspiration for your music?

Emily West: You know-I love old school country music-my heart yearns for old school country. The great thing about the throwdown tour is that we have old school country, and then we got the rock and roll kind of country music. I’ve always felt…just that real raw side of country where you hide nothing. It’s always good. She has been an inspiration as far as how I feel with my writing. She has such an ache sound to her voice, and I think that’s one thing that’s lacking. A lot of people try to be perfect in their vocals, and I think emotionally, my whole thing is that I don’t care if I hit the note. Maybe others do, but I’d rather feel it and sing it and have the audience feel it.

PGM: How do you feel about performing here this year?

Emily West: Oh man-it’s our 2nd show-i have been playing with some rowdy-unbelievable guys name the….Grove-they are all well…Jonathan is letting me borrow their band because I can’t afford my own-they are already here on the tour-kicking butt-they are the coolest guys-it’s mind boggling how unbelievable they are. I am having a good time with the band i have and the crowd is killer. There are fans on the stage to blow my hair so it looks like I’m in a Led Zeppelin video or something-meets Patsy Cline.

PGM: You  have a new album coming out in August…..

Emily West: Yes. It’s supposed to be out….I don’t want to name any names, then the fans get frustrated with me when I say the actual date, and you never know how things are going to go. Let’s just take it a day at a time. I think it is going to be out this summer, sometime.

PGM: Share with us a little of what to expect from your album.

Emily West: Blue Sky featuring Keith Urban which is available for download on the Celebrity Aprentice. This record was a long record to make. it’s my in-my-20’s record. I started working on it when I was 23 years old-started getting myself into situations with bad boyfriends, just so I could have some content to write about. I would specifically go to bars and get a couple of drinks in me, then go find a loser and date them, so I could have something to write about (I’m just kidding), so I could have some content. No, it’s basically about having your heart broken, and then getting back on your feet. “Annie is going to get a new gun”, aka is finding a new boyfriend. It’s a quirky fun record; it’s inspirational to a lot of people. Blue Sky obviously have affected a lot of people who have gone through a lot of break-ups, divorce and separation. There is something to say about walking away from a very conflicted relationship and saying, “I am not going to audition in front of you anymore. I am not the good thing in your life, I am walking away.” There is no crying in baseball or country music.

Emily West: It’s all about crying, that’s my problem. I am a drama queen-I love-I am such a quirky, psychotic girl. People think of me as the psychotic funny pants, but deep down i love to write the sad stuff. That is why I am attracted to country music.

PGM: Tell us your experience with the collaboration with Keith Urban.

Emily West: I really fought hard. He is hot in every way; we are talking about Keith Urban here. First of all, he is not here to get money, and get famous, he is here to make music and that’s the great thing about him. That is why he sticks to the wall like a noodle for long; he is never gonna go away. He is going to continue to make great music, and he is gonna do it for the music and his fans, so I have a lot of musical integrity, respect to this guy. He is a great person. I emailed him, mp3’d him, and gave him a copy of Blue Sky demo, 30 minutes later he said, “I would love to sing with you, on this exquisite song”.

PGM: “Would you marry me?’ Was that what he said?

Emily West: No-No-No, he sang with me on the Blue Sky song. Hey look, I’m a girl’s girl. Nicole and I we go way back, I would never take him away. He was up in New York and he put a lot of amazing guitar sounds on it, and he just made the song so beautiful. I am so thankful.