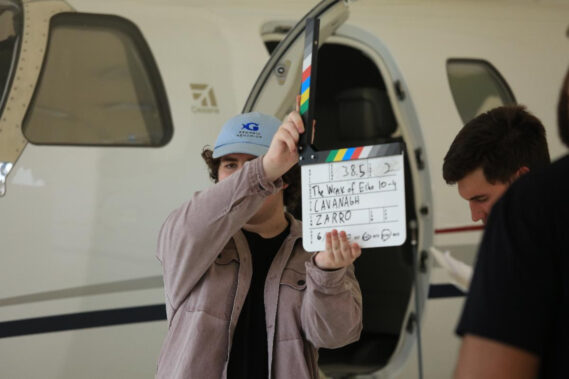 ‘This place is just a gem’: Locals discuss making Florida more competitive for TV, movie productions
The Vilano Beach community has something to be excited about: Netflix is producing a new series at the Magic Beach Motel. Action News Jax heard it could be related to a show called “Straight Shooter.” Chad Brooksher was one of many checking out the set of the still-unknown series. Major productions are not new to him. He just moved to Florida from Georgia. CLICK HERE to watch.
The Wreck of Echo
A local Palm Beach County prep school makes a splash in the film industry. The Wreck of Echo 10-4 is a four-part murder mystery created by Phil King and Austin Parenti, Director of Digital Media Arts at King’s Academy in West Palm Beach. The series came to fruition in August 2021. The writing team consisted of Austin Parenti, faculty member, Phil King, along with Ryan Cavanagh and Lina Apicella. These students dedicated so much time and effort to the school’s Digital Media Arts program that the director trusted their capacity to not only write an episode but also direct it. The storyline follows the events after a millionaire’s private plane mysteriously crashes and the evidence pointed to sabotage. The project will premiere downtown at The Square’s AMC Theater on Friday, December 2, 2022 and will be available for digital streaming online.
Miami-Dade College PA Bootcamp
Film Florida is proud to partner one again with Miami-Dade College for their PA Bootcamp, September 24-25, 2022. The PA Bootcamp includes two full days of training to learn essential entry-level skills and earn an official certificate of completion. Call the Miami-Dade County College School of Continuing Education & Professional Development at 305-237-8173 for more information and to register.
“Salud 24/7” from SanRico Film & Music
Salud 24/7 is an informative, entertaining, Spanish-language medical show that humanizes medicine by focusing on physical, emotional and mental health for viewers. This is accomplished through a variety of segments featuring healthcare professionals in each episode. The mission is to reach the Hispanic community and empower them to make the best health decisions for their life. The show premiered on Wednesday, August 31. It is recorded in Orlando, FL and it is broadcasted weekly on Facebook and Telemundo 31. CLICK HERE to watch episode 1.