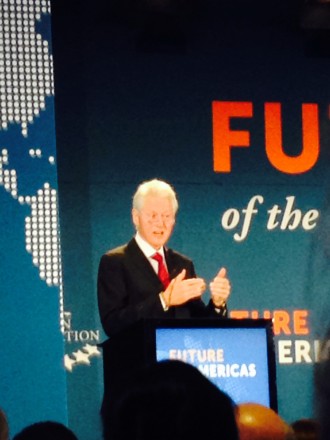 On December 11  President Clinton hosted the Future of the Americas at the University of Miami, a gathering of world leaders, business people and philanthropists dedicating to improving the lives and integration of those whom call the Americas their home.  It also included those from the Caribbean, not officially from the Americas but everyone knows we rock. We make the world spicy and don’t you forget it.

Most of the nuts and bolts of the conference were in private small gatherings away from the press so much of what was discussed remains only broadly known.

I was privileged along with  my partner in crime, journalism and friendship, Dr. Mark Goodman to sit in on an hour or so panel discussion prior to the break out meetings.

Today was a summit. A summit has many meanings.   Indeed today was a meeting of intersecting interests but it was a summit in a different sense as well.

All great accomplishments are in a sense a climb up a mountain, a difficult trek requiring superhuman strength and dedication to reach a summit, a goal.  But as all climbers will tell you, reaching the summit is not the validation of the effort. No, the sanctification of the ambition is the lessons learned, the skills honed, the friendships secured, the risks shouldered and most importantly the example that is planted to inspire others.

I listened to the panel and President Clinton, and in a sense to take a line from Jerry Seinfeld, it was  “ about nothing “ general  although sometimes eloquent discourse about the value of lifting up the poor, lowering debt, and improving health care. It was  banter about empowering the builders of our world to have enough prosperity to enjoy their labors and in doing so raise the standard of living for all of us.  It was about being in a boat that floats or glides not at the bequeath of one person but at the mercy of the aggregate of all those whom sail the sea.

Even Carlos Sims, the second richest person in the world ( a panelist at the event), cant fix global warming nor provide food for the masses whom surround his world.  Even a billionaire suffers in world when rising sea levels obliterate coastal paradises and species of animals and plants that give us pleasure. Even the richest suffers when poverty leads to mass criminality as a means to survive, when blight of large swaths of land abut ones “safe “ sanctuaries.

But  like the show Seinfeld, like this conference,  it was not really about “nothing”. It was about everything.  It was about elucidating, in a reflective and productive manner  our need to improve and understand ourselves and most importantly our neighbors  We learned so much from Seinfeld. We saw, our own weaknesses, our silly angsts, our deluded sense of ego, our  fears, our awkwardness, even our weirdness through the characters  of the show.  We found ourselves in them.

This is the magic of camaraderie. It is the embracing of our commonality in a world where color , geography, economics, language  and  religion   separate us. This summit allowed those with similar interests but perhaps momentarily divergent priorities   to understand and hopefully resolve problems, which affect them all albeit in different severities.  It is to put a face on, a character on issues which are our own but perhaps hidden by the muck of superficial differences.

People got together; the exact words or concreteness of their statements is  secondary to the fact that a flag was planted with many arms outstretched.  Change happens amongst friends, with those whom see each other’s plight as their own.

The mountain was climbed even if the summit was not reached today; the journey was valuable a harbinger for things to come.

One more comment, I was impressed by Susan Fonseca founding Member of Singularity University ( woman @Thefrontier ). She was the sole woman panelists who spoke both forcefully and eloquently on our challenges in the Americas, not the least being the under utilization of woman in leadership positions. Don’t cry,  but by comparison, her prose and reflective words sort of made the boys look … well like men.. just  adequate.  She represents the bank of great talent in the  50% of the population whom can  multi-task while wearing six inch heels and not complain about it

Sadly in a number of press releases her  name was  omitted as a panelist.  Perhaps sometime in the future being the   most eloquent and reflective speaker might gain you a shout out, after all this is the Americas. I liked her shoes too.  See you in the lifeboat.