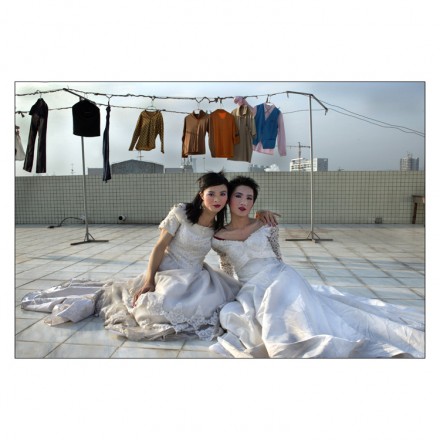 The University of Miami Lowe Art Museum presents 150 photographic works by seven photographers from mainland China in the exhibition, China: Insights, on view November 12, 2011-January 15, 2012. The artists explore the relationship between contemporary photography and visual culture by undertaking the creation of a long-term documentation of one or more aspects of Chinese culture that reflects something vital about China now — whether that is something emerging or something vanishing.

The seven photographers—Chen Yuan Zhong, Hua Er, Jia Yu Chuan, Li Nan, Yang Yan Kang, Yu Haibo, and Zhang Xinmin—earn their livings as either freelance or staff photographers (or, in one case, as a freelance writer). Collectively, these photographers have numerous publications, exhibitions, and awards to their credit, but little of their work has appeared outside mainland China.

Six of the seven photographers — Chen Yuan Zhong, Hua Er, Jia Yu Chuan, Yang Yan Kang, Yu Haibo, and Zhang Xinmin — are based in Shenzhen. Just across the border from Hong Kong in southern China, Shenzhen was the first of the Special Economic Opportunity Zones established by China in the post-Mao era, as magnets for entrepreneurs and educated people in all fields. Already a world-renowned center for printing and information technology, among other industries, Shenzhen was a fishing and farming community with a population of roughly 20,000 in 1980. Today it is a booming 21st-century metropolis whose population exceeds 13 million, with an average per-capita age of 30. As such, it serves as a microcosm revealing many of the dramatic shifts in contemporary China. The exhibition moves from the rural scene to the metropolitan context, echoing developments in China today.

While some of these photographers focus on aspects of life in their home city, others look at situations outside of Shenzhen. Their themes include rural Catholicism, matrilineal culture in an agrarian setting, the population shift from country to city, prostitution, gender and identity, typologies of urban citizenry, and the emergence of a thriving pop music/club scene as an index of internationalization. They approach their subjects employing methods ranging from classic modernist documentary to more formally experimental styles.  exhibition’s images and texts make it relevant to such diverse disciplines as visual anthropology, sociology, urban studies, economics, geopolitics, Asian studies, and of course contemporary photography and visual culture.

Produced by the Foundation for the Exhibition of Photography, Minneapolis, Minnesota, with production assistance from the Flying Dragon Cultural Enterprises, Ltd, Hong Kong. Curated by A.D. Coleman and Gu Zheng. Sponsored by HSBC Private Bank.

The University of Miami’s mission is to educate and nurture students, to create knowledge, and to provide service to our community and beyond. Committed to excellence and proud of our diversity of our University family, we strive to develop future leaders of our nation and the world. www.miami.edu.

Chinese Musical performance by the Chinese Performing Arts Group. Hear the tantalizing sounds of the Guzheng, Hulsi and Violin. Cocktails by Bacardi and wine by Rex Goliath

Sponsored by Philip and Denise Gerson

About the lecturer- A. D.Coleman is the co-curator of China: Insights and a prolific writer of photography history and criticism who has published widely since the 1960s. During the 1960s and 1970s, Coleman was a regular columnist for the Village Voice, Popular Photography, The New York Times and Camera 35. His recent books include Critical Focus: Photography in the International Community (1995) and The Digital Evolution: Photography in the Electronic Age, Essays, Lectures and Interviews, 1967-1997 (1998). Curatorial projects include “Testimonies: Photography and Social Issues” (Houston Fotofest International 1990) and SAGA: The Journey of Arno Rafael Minkkinen (FEP, 2005, co-curated with Todd Brandow). He received the first Art Critic’s Fellowship ever awarded in photography by the National Endowment for the Arts in 1976, and a major Hasselblad Foundation Grant in 1991. A Fulbright Senior Scholar in Sweden in 1994, he received the prestigious Kulturpreis der Deutschen Gesellschaft für Photographie (The Culture Award of the German Photographic Society) for 2002.