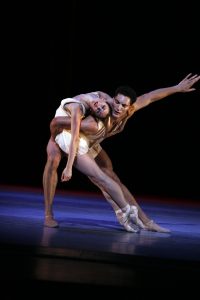 Long renowned as a transformational force in American dance, the venerable JOFFREY BALLET makes its debut at the Sanford and Dolores Ziff Ballet Opera House of the Adrienne Arsht Center for the Performing Arts of Miami-Dade County on Friday, March 26, 2010 at 8:00 p.m., followed by a second performance on Saturday, March 27, 2010 at 8:00 p.m. The Joffrey Ballet appears at the Adrienne Arsht Center as part of the Sanford and Dolores Ziff Dance Series, 2009-2010 John S. and James L. Knight Masterworks Season.

“The Joffrey Ballet has been one of this country’s most glorious institutions for more than 50 years,” said M. John Richard, President and CEO of the Adrienne Arsht Center. “This engagement continues our own new tradition of presenting the very best dance from around the world in the Sanford and Dolores Ziff Dance Series. In many ways, The Joffrey Ballet is the quintessential American dance company, with exquisite technique and a soaring spirit of adventure that is sure to delight our South Florida audience.”

The program will feature four acclaimed works that capture the grace, beauty, and athleticism of the world-renowned ballet company. The Joffrey will introduce Miami to one of its recent major hits, Age of Innocence, an original work with a mesmerizing score by influential 20th century composer, Philip Glass, and noted Hollywood film score composer, Thomas Newman, and choreographed for the Joffrey by a brilliant new voice in American dance, Edwaard Liang. In creating Age of Innocence, Liang was inspired by the novels of Jane Austen and the women of her era who demonstrated significant grace and strength of spirit in the face of societal repression. While the ballet’s title recalls Edith Wharton, its real subtext springs from the works of Austen. A former New York City Ballet soloist, Edwaard Liang has been named by Dance Magazine as among the “Top 25 to Watch” in ballet choreography.

The Joffrey Ballet has been hailed as “America’s Ballet Company of Firsts,” having notched an astonishing number of firsts, including the first dance company to perform at the White House, the first American dance company to visit Russia; the first to commission a Rock ’n’ Roll ballet; and the first and only dance company to appear on the cover of Time magazine.

The Joffrey was founded in 1956 by visionary teacher Robert Joffrey and Gerald Arpino as a uniquely American company of dancers for whom they choreographed original and relevant ballets, commissioned works from the finest emerging choreographers (giving many their first national exposure), and meticulously reconstructed some of the early masterworks of the 20th century.  For more than 50 years, The Joffrey Ballet’s commitment to taking world-class, artistically vibrant work to a broad and varied audience has created a solid foundation that continues to support the company’s unprecedented capacity for achieving important “firsts.” Today, the company, which has been hugely successful in its former residencies in New York and Los Angeles, lives permanently in a brilliant new facility, Joffrey Tower, in the heart of America, Chicago. It continues to thrive under its internationally renowned Artistic Director Ashley C. Wheater, who was recruited as a dancer in 1985 by Joffrey and Arpino before returning to lead the company in 2007, after a heralded tenure at the San Francisco Ballet. The company’s commitment to accessibility is met through the most extensive touring schedule of any dance company in history, an innovative and highly effective education program, and collaborations with myriad other visual and performing arts organizations.

The Joffrey Ballet’s engagement at the Adrienne Arsht Center is generously sponsored by Gala and Stanley Cohen.  WLRN 91.3 and WLRN TV Channel 17 are media sponsors of the Sanford and Dolores Ziff Dance Series.