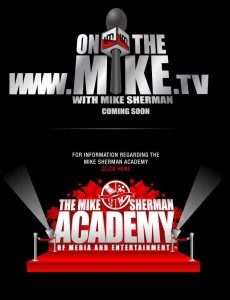 The prime-time music and lifestyle celebrity-driven TV show, “On the Mike with Mike Sherman” takes things to whole new level this fall.

On the Mike Productions has signed several multi-year deals that will air “On the Mike” on the R&R TV network (Direct TV), My Channel UK (Sky TV), and the Caribbean Media Corporation (CMC). All 3 networks will now open the door for Mike to showcase some of the most celebrity-driven music content in the world, to an international audience. The episodes will start airing on September 15th 2010, in rotation, several times a week.

“I feel very excited to be able to show the rest of the world what south Florida has been watching for years! What makes our show so unique is that we cover everything from the VMA awards to the Ms Universe Pageant! There is really nothing else quite like it on TV today. Our goal is to appeal to the younger audience and to let them enjoy half an hour of fast-paced, highly entertaining television. We also now have our own iPhone, Android and Blackberry application so our worldwide audience can watch interviews with some of the hottest celebrities in music wherever they are in the world!” says Mike Sherman.

About “On the Mike with Mike Sherman”

“On the Mike with Mike Sherman” is produced by Mike Sherman Productions Inc. The show debuted on Saturday night on My 33, the CBS affiliate, in Miami in 2003 and is now syndicated all over the world. The show brings the South Florida market closer to exclusive interviews, VIP and red carpet events, concerts, and A-list celebs. Creator/producer: Mike Sherman. Executive producer: Matt Bodi Brenowitz