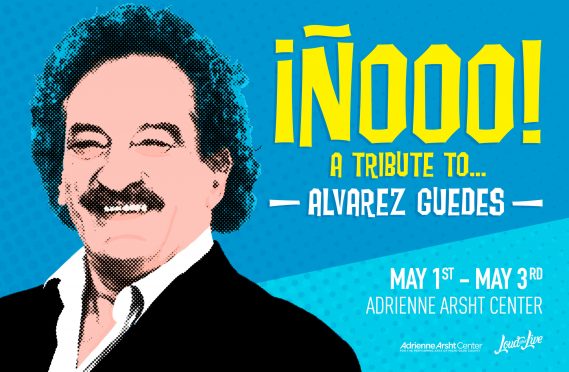 From the producers of ¿Qué Pasa USA? Today … 40 Years Later, Loud And Live and the Adrienne Arsht Center for the Performing Arts of Miami-Dade Countytoday announced the premiere of ¡Ñooo! A Tribute to Álvarez Guedes, a tribute to the famed Cuban comedian who redefined Latin comedy, becoming an icon of good humor in his homeland and abroad. The five performances will take place at the Ziff Ballet Opera House of the Adrienne Arsht Center starting on Friday, May 1st through Sunday, May 3rd. Loud And Live has committed to make ¡Ñooo! a touring show and an announcement with details on tour cities and dates will be made after the Miami premiere run.

Guillermo Álvarez Guedes was an actor, writer, screenwriter, director, entrepreneur, record producer…but above all, one of the greatest Latin American comedians in history. In his native Cuba, he had a successful career in theater, radio, television and nightclubs, but it was in exile that he became a legend and one of the most recognized and loved artists of all time.  He was the first Spanish-language comedian to use vulgarity in his routines and inspired countless Hispanic comedians.  His comedy appealed to fans from around the world.  Even English-speakers enjoyed his humor as his best-selling album, How to Defend Yourself from the Cubans, was done primarily in English.

“Producing concerts and shows comes with an important responsibility towards our community. In 2018, I fulfilled a dream by paying tribute to one of the most significant television programs for Hispanics with ¿Qué Pasa USA? Today … 40 Years Later,” says Nelson Albareda, CEO of Loud And Live. “I have always wanted to recognize the greats of our history who play such a vital role in shaping who we are today, and with this show we honor an icon who transformed Spanish-language comedy.”

¡Ñooo! A Tribute to Álvarez Guedes, brings his story and best-known routines back to the multiple generations who still enjoy the humor of the comedy genius who created a unique and universal language of laughter. Well-known comedians, actors and special guests who knew him will tell his story, supported by unpublished audiovisual footage that will take the audience back to the years when Álvarez Guedes was unquestionably the reigning King of Comedy.  An announcement of the confirmed cast will be made in coming weeks.

“I don’t see him as the famous comedian. For me, he was my husband of 58 years and the father of my daughters,” says Elsy Álvarez Guedes, widow of the late comedian who has provided much of the material that will be used in the show. “Guillermo would love to know that his comedy endures and that the public still admires, remembers and loves him.”

Relive the legacy of a Comedy Master: Guillermo Álvarez Guedes.

*All programs, artists, ticket prices, availability, dates and times are subject to change without notice. Visit www.arshtcenter.org for up-to-date information.