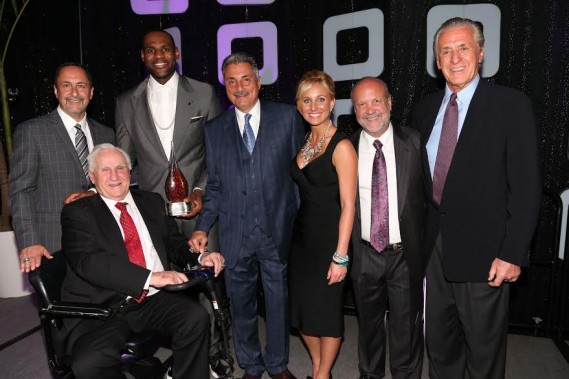 Sun Sports HEAT TV broadcasters and two of South Florida’s leading sports media personalities, Eric Reid and Tony Fiorentino host the ninth annual Reid & Fiorentino Call Of The Game Dinner & Celebrity Golf Classic.  Taking place on March 28th and March 30threspectively, the two-day fund raising event and highlight of social season attracts some of the region’s biggest names in sports and entertainment, while honoring the achievements by some of the today’s most acclaimed community heroes. The fund-raiser will benefit two of the most eminent local charity organizations – Lauren’s Kids and Dade Schools Athletic Foundation.

The Call Of The Game Dinner Presented by Acordis Hosted by Seminole Hard Rock Hotel & Casino will take place on Saturday, March 28th from 6:30 p.m. to 10:30 p.m.  Renowned South Florida sports broadcaster Joe Rose will emcee the evening’s entertainment as the Master of Ceremonies, while some of today’s most distinguished individuals are honored for their work towards making a difference “behind the scenes” in our community. A highlight of the evening will be the legendary NFL coach Don Shula who will take to the stage as a special presenter to honor Miami Dolphins Hall of Famer Dan Marino with the Don Shula Sports Legend Award.  While being recognized as one of the greatest quarterbacks in football history, holding dozens of records for his playing position under the helm of Shula for many years, Marino led the Dolphins to the playoffs ten times in his seventeen-season career, which resulted in his induction into the Hall of Fame in 2005.  As a South Florida resident, he established The Dan Marino Foundation in 1992 with his wife, Claire, after their son, Michael, was diagnosed with autism. To-date the foundation has distributed over $22 million to research, services, and treatment programs serving children with neurodevelopment disabilities.

The Reid & Fiorentino Call Of The Game Dinner will also honor the renowned Brazilian pop art icon Romero Britto with the Ted Arison Community Service Award for outstanding work throughout South Florida and around the world.  Britto has lived in Miami since 1989 and during that time has established himself as a household name in the international art world.  Britto is best known for his reinterpretation of the famous Absolut Vodka bottle, which would be published and seen by millions. Consistently challenging himself, Britto has completed other esteemed corporate works for Movado, Enrico Coveri, Pepsi, the United Nations, BMW, Royal Caribbean Cruises and most recently, Disney.

One of the evening’s most unique awards will be presented for a fourth year to commemorate the late, great legendary broadcaster, Jim Mandich.  The Jim Mandich Courage and Commitment Awardwill be presented to the inspiring local basketball coach Jeff Fogel. Born and raised in North Miami Beach, Jeff has been working with kids as a counselor and coach for over 20 years at the Michael-Ann Russell JCC in North Miami Beach. In February 2012, Jeff was diagnosed with ALS, or Lou Gehrig’s disease, and he no longer has the use of his arms and now relies heavily on a wheelchair. Despite his daily challenges, the disease doesn’t slow him down and Jeff continues to coach in house basketball and flag football and serves as the current director of the Girls Prime Time Basketball team, currently ranked 1st in the State of Florida and 2nd in the national rankings for the USSSA league.  Past Jim Mandich Courage and Commitment Awards have been presented to Nick Buoniconti and Marc Buoniconti for their outstanding work with The Miami Project to Cure Paralysis and CNN correspondent, Sara Ganim, for breaking the story on the Penn State sex abuse scandal. Last year’s award was presented to Arizona Congresswoman, Gabrielle Giffords, for her heroic survival, recovery and advocacy as a result of being shot in 2011.

Renowned Sports Radio 560 broadcaster, Joe Zagacki, will receive the Sonny Hirsch Excellence in Sports Broadcasting Award. This award honors an outstanding sport broadcaster that has had a great impact in their field, while making notable accomplishments within the community. Past award winners include Joe Rose, Tony Segreto, Hank Goldberg, the late Jim Mandich, Dave Van Horne and Steve Shapiro.

With an illustrious attendance of sports personalities, business leaders and notable philanthropists, the dinner will include a silent auction as well as a live auction featuring sporting memorabilia, luxury vacation packages and one-of-a-kind experiences, among other items, that attendees will have a chance to bid on throughout the evening. The night’s entertainment will include a special guest performance by recording artist, Phyllisia Ross.

The Celebrity Golf Classic Presented by Acordis will take place on Monday, March 30th at the prestigious Turnberry Isle Miami, with registration starting at 11:00 a.m.  More than 50 foursomes will converge on the championship courses for an exhilarating day of competitive golf, whereby each team will be paired with a celebrity team captain vying to win a series of prizes awarded at the end of the day during the post-golf awards reception.  In addition to lunch and on-course refreshments, players will be invited to participate in the Hole-In-One Challenge, for a chance to win a 2-year lease on a luxury vehicle sponsored by AutoNation. Previous Golf Classic celebrity participants include Alonzo Mourning (Miami HEAT), Troy Stradford (former NFL/Dolphins), Steve Whitaker (New York Yankees/Giants), Gino Torretta (Heisman Trophy winner), Chad Henne (Miami Dolphins), PGA golfer Woody Austin, Dan Marino (NFL Hall of Famer) and Cornelius Bennet (Colts/Bills/Falcons) among many others.

“We are pleased to announce the dates for this year’s annual Celebrity Golf Classic and Call of the Game Dinner,” said Tony Fiorentino.  “Both events continue to draw some of the region’s most celebrated names in sport and community leadership.  Each year we continue to support Lauren’s Kids and Dade Schools Athletic Foundation, two of the most remarkable charity organizations that ultimately benefit our kids in the community and throughout the region.  We are proud to be honoring such outstanding individuals for their work above and beyond the call of duty, and we thank all of our sponsors and patrons for their most generous support.”

Lauren Book, founder of Lauren’s Kids, comments: “This year’s Call Of The Game Dinner and Celebrity Golf Classic will actually be held during the Lauren’s Kids annual 1,500-mile ‘Walk in My Shoes’ walk across Florida – a first in this history of the Reid & Fiorentino events! Our Walk will kick off on March 14 from the Southernmost Point of the U.S. in Key West and we will walk north, stopping in South Florida for the Celebrity Golf Tournament and Call of the Game Dinner and receiving tremendous support from event attendees before hitting both coasts and the Panhandle, ending our walk on the steps of the Historic Florida Capitol on April 22. The ultimate goal of our organization is to prevent child sexual abuse and exploitation though education and awareness, and to help support survivors of these crimes with guidance and support. None of our work would be possible without the funds raised through the Reid & Fiorentino events; Eric and Tony have been phenomenal in helping to raise awareness for our cause and we thank everyone involved with helping make the events such a success.”