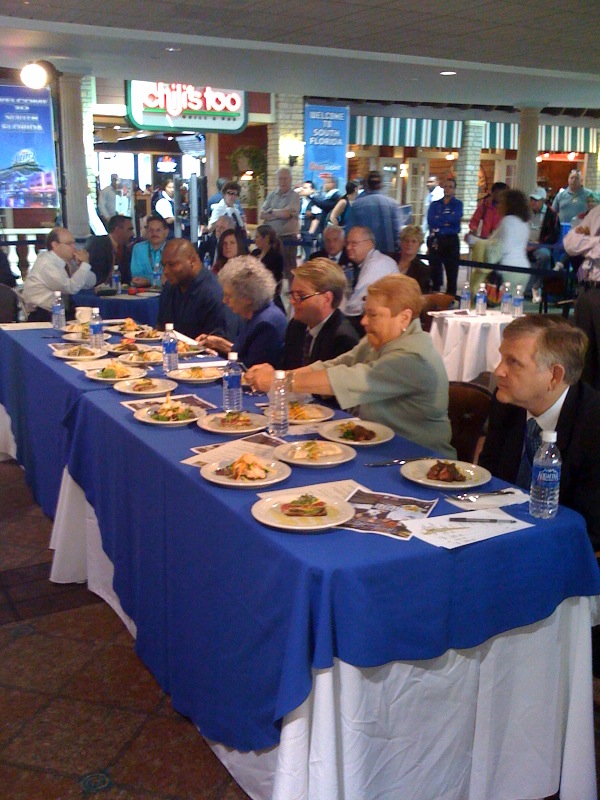 The Chef Cook-Off held at the Fort Lauderdale-Hollywood International Airport kicked off the 2010 Taste of the NFL with funds donated to a good cause. Executive NFL chefs battled it out in an open kitchen set up at the airport’s Terminal 3, where they were given forty-five minutes to prepare two dishes with a pre-set assortment of ingredients, and using only one pan. Judges included Broward County Mayor Ken Keechl; Broward County Vice Mayor Sue Gunzburger; Nicki Grossman, president & CEO, Greater Fort Lauderdale Convention and Visitors Bureau; Tim Lewis, TSA federal security director for Fort Lauderdale – Hollywood International and Key West International airports; and Jeff Cross, former Miami Dolphins defensive end. Emceeing the event was Chef Allen Susser, who represents the Miami Dolphins and who has partnered with Delaware North Companies Travel Hospitality Services on Chef Allen’s 2 Go at the airport.

The winning chef, Mark Haugen, chef and owner of Bar Abilene restaurant representing the Minnesota Vikings and the Tejas restaurant in Minneapolis, who was co-founder of the Taste of the NFL, prepared a hot dish of barbeque shrimp tacos with mango slaw and his cold dish featured a sashimi tuna tower with avocado and mango. His opponent, Chef Chris Rossi of the Oakland Raiders and the Citron restaurant in Oakland, Calif., prepared Atlantic salmon roulade with gulf prawns and green mango salad for his hot dish and balsamic marinated skirt steak with fingerling potatoes and sautéed spinach as a cold dish. The winning chef received an All-Clad sauté pan and $500 donated in his name to Feeding South Florida, a local food bank.

The setup included one cooking station for each chef and cameras putting the action on display for event attendees and airport visitors. Each chef had a student assistant who was a Delaware North Companies employee from the International Culinary School at the Art Institute of Fort Lauderdale. While the chefs raced against the clock to prepare their meals, guests enjoyed samples from the new Chef Allen’s 2 GO menu offered at the airport and asked cuisine-related questions during the cook-off.