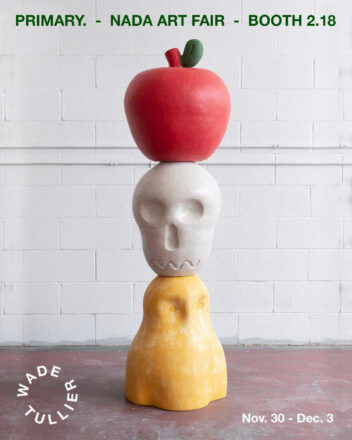 Potter’s figures often feature society’s underdogs; the criminals, fighters, and runaways he associates his work with are similar to characters in novels by John Steinbeck, Ernest Hemingway, and Larry McMurtry, whose writing influences Potter’s work. Although he continues to create more intimate work, the artist’s enthusiasm for large scale works began when he was apprenticed to paint billboards in New York. Potter was the recipient of the Roger Smith Artist Fellowship at the Vermont Studio Center in 2018 and was awarded residencies in London at the Plop Residency and The Fores Project.
Wade Tullier (b.1988, Baton Rouge, Louisiana) is a Detroit-based visual artist working primarily in ceramics and sculpture. His work and process are heavily influenced by storytelling and being raised within the landscape of southern Louisiana.
Tullier holds a BFA from Louisiana State University and an MFA from Cranbrook Academy of Art. He has exhibited nationally and internationally, with recent shows in Miami, Chicago, and Detroit. His work is included in ‘With Eyes Opened: Cranbrook Academy of Art Since 1932’ at the Cranbrook Art Museum and is currently included in ‘Clay Pop’ at Jeffrey Deitch New York. Tullier is represented by Primary in Miami.
Primary. (Est. in 2007) is a context & research-driven curatorial collective with a focus on public arts. Located in Little River, Miami, our private residence explores modern ideas on the subject of live/work, connecting new voices in contemporary art with growing audiences & collections.
For further information, please contact info@thisisprimary.com