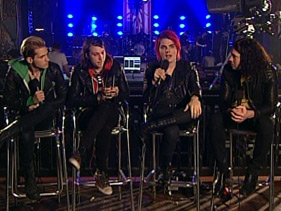 It has been almost two years since My Chemical Romance has recorded or toured. The Jersey band had conquered the globe with their platinum-selling third album, the bombastic and bleak The Black Parade. Now their latest effort, Danger Days: The True Lives of the Fabulous Killjoys, is the album My Chemical Romance have been building towards their entire, nearly decade long career. From soaring sentiment (“The Only Hope for Me is You”) to bare-knuckled brawling in the streets (“DESTROYA”) it defies lazy labels and demolishes expectations. Beholden to no scene, credo or code it’s a rock’n’roll album from the future aimed directly at the dead-hearted present. No song sums up the gleefully creative explosion that is Danger Days as well as “The Kids From Yesterday.” Recorded in May at the very end of the process, the track is fresh yet immediately familiar, a bracing blast of invented nostalgia and misremembered memories. It’s already the band’s favorite song on the album and, perhaps, in the entire My Chemical Romance catalogue. The song completes the circuit from the last album’s fearful, freaky “Teenagers.” Gone is that song’s paranoia and fear of the future. In its place is hope.  “Lyrically, I felt I had to write that song to be complete with the album,” frontman Gerard Way says. “What it means to me is: I’m a grown-up now – we all are – and that’s cool. We’re a generation of wild artists, free thinkers, crazy people. We’re not going to lay down and have a boring life because we’re supposed to.”