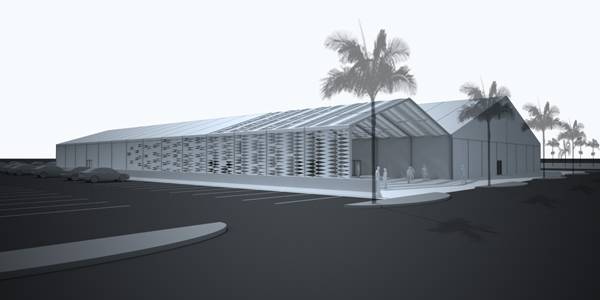 Design Miami/, the global forum for design, will present its sixth edition this December in an engaging new Temporary Structure created by New York-based architecture and industrial design studio Moorhead & Moorhead. Commissioned by Design Miami/ to transcend the appearance of a traditional clear span tent while working within the limitations of the structure, Moorhead & Moorhead’s final design manipulates the most common tent materials in unexpected and innovative ways. The tent’s interior, designed by New York architects ArandaLasch abandons the typical trade show grid and creates a miniature city on a ‘scatter’ pattern that encourages guests to stop, explore, and engage with the show’s unique geography.

“The brief to design the Temporary Structure for Design Miami/ is an exciting one for the selected designers, but also extremely challenging,” says Wava Carpenter, Acting Director of Design Miami/. “Once commissioned, the designers must not only come up with a fresh approach to creating a tent–a design that has arguably reached its most efficient state – but they must do so in a way that will inspire excitement and awe in the show’s attendees. Moorhead & Moorhead have met this challenge head-on in an incredibly intelligent and inspiring way.”

Typical of their approach, Moorhead & Moorhead began the process of designing this year’s structure through a collaborative, hands-on exploration of vinyl, the most basic of tent materials. The Moorhead & Moorhead studio in New York City includes a prototyping shop that allows the team to push materials to their natural limits in order to fully understand a material’s “behavior” before embarking on a final design.

“With any design project, there is always a give and take between the intentions of the designer and what the material will actually do in the real world. For us, that is often the starting point,” says Granger Moorhead, Co-Founder of Moorhead & Moorhead. “For the Temporary Structure, we first wanted to embrace the existing form and structure of a typical tent, while manipulating or deconstructing its surface. A series of full-scale vinyl mock-ups helped us to develop a pattern of cutting and folding, which allowed us to take the flat surface of the typical tent panel and transform it into an open volumetric latticework. We chose vinyl as a starting point, in part for durability and engineering reasons, but primarily as a way to celebrate the everyday tent.”

To develop the Temporary Structure, Moorhead & Moorhead worked closely with manufacturer EventStar, the leading expert in the field. Together, their final design embraces the true nature of the tent by never camouflaging the design elements typical of tent structures. Simultaneously, the design elevates the idea of commercial tent design in a way that will delight visitors while subverting their sense of space and depth. Using minimal materials for maximum impact, the structure will be bordered by two busy streets in Design Miami’s new location on Meridian Avenue and 19th Street in South Beach, adjacent to Art Basel Miami Beach. The final design includes a whitewashing of the space’s exposed elements, creating a welcome sense of stillness and respite within its buzzing South Beach setting. 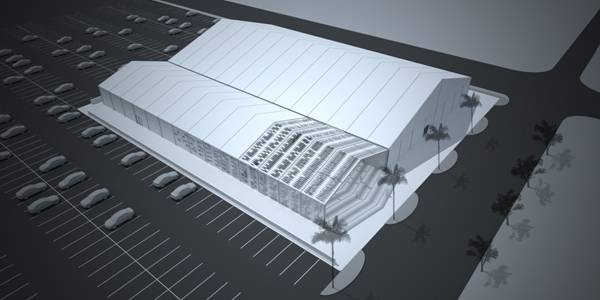 The design of the Temporary Structure will feature a partially covered courtyard in which guests will be allowed to linger and relax. Moorhead & Moorhead have

created this space by folding and cutting the tent’s vinyl façade in a striking mosaic pattern that will create ever-changing displays of light and shadow. This entrance courtyard will house the Designer of the Year Commission, conceived in response to Moorhead & Moorhead’s design.

“One of our primary goals with this year’s structure was to take every opportunity to create an engaging experience for our guests,” says Craig Robins, Co-Founder and Principal of Design Miami/. “Above everything else, Design Miami/ is about taking the opportunity to teach new visitors about design while creating a one-of-a-kind experience for the design community. For this year’s show, it was important for us to use the exhibition space as a means to move beyond the traditional trade fair format and turn it into something that is truly unique and special.”

The design by New York-based architects ArandaLasch for this year’s floor plan will be arranged in a “scatter” pattern. Inspired by the unique layouts of medieval cities, ArandaLasch have employed spatial eccentricities as a way to encourage guests to move about Design Miami/ in a way unlike any other trade show. The firm’s previous experience with designing for Design Miami/ allowed them to completely re-imagine the show’s structure. Their design for 2010 will do away with traditional walls and boundaries, increase visibility for exhibitors, and create more natural gathering points for attendees. By making the layout less obvious, ArandaLasch’s design will encourage guests to get “lost” within the show, find their own unique paths, and discover exhibition spaces that are more memorable than ever before.

“The layout works through sightlines,” says Benjamin Aranda. “Instead of walking down one aisle and up the next, visitors will see something in the distance and move towards it. By scattering the layout and doing away with the typical cubicle format, we’ve created gathering points throughout the floor plan which gives every exhibitor added visibility. The ‘looser’ organization allows for the creation of memorable geographical markers for attendees and completely unique booths for exhibiting galleries.”

The sixth edition of Design Miami/ is marked by an increase in returning galleries, who represent the world’s leading dealers specializing in limited-edition design.