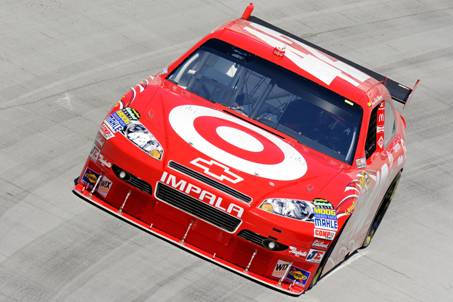 “It was good, we needed this result. It is important to finish well….This is what we needed was a race like this.”

With the Top 3 finish, Montoya jumped four spots in the standings for the Sprint Cup title, with the Champion to be crowned on Montoya’s “home track” of Homestead-Miami Speedway Nov. 21.

With late-race wrecks resulting in cautions extending the race 12 laps beyond the number scheduled, Montoya emerged on the third and final “green-white-checkered” finish getting a push from behind from Denny Hamlin. “I had a really good restart, and I’m like: ‘We got him. I’m with [Hamlin], I’m going to win this,'” Montoya said. “All of a sudden, the inside [drivers, Harvick and McMurray] just took off.”

Plagued by on-track accidents this season, Montoya has finished all of four races in their entirety, but he has three Top 5s and a Top 10 to show for it.

Said Montoya: “We’ve been involved in three wrecks where it’s completely out of our hands, but it’s part of racing….I think [we] have the potential to make the Chase, and we’ve just got to be smart about it….At least we’re 4-for-4 now, and in the four finishes we got a Top 10 and three Top 5s.”

Montoya, South Florida’s NASCAR hometown’er continues his pursuit of the Sprint Cup Series Championship—to be crowned Nov. 21 on his “home track” of Homestead-Miami Speedway—next Saturday night at Richmond. The race will be broadcast on FOX and is scheduled to begin at 7:30 PM.