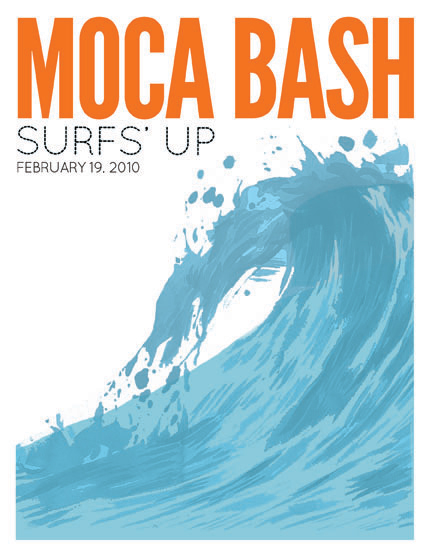 The excitement is growing for MOCA BASH Surf’s Up, the Museum of Contemporary Art’s annual cocktail and dance party. This year, the MOCA BASH celebrates the thrill of surfing. On February


Tickets to MOCA BASH Surf’s Up are $150 in advance, $175 after January 21 and may be purchased by calling 305 893 6211 or visiting www.mocanomi.org. Proceeds will benefit the museum‘s public programs and art acquisition fund.

To launch the event, MOCA will host a kick-off party Thursday, January 13th at The Catalina Hotel & Beach Club, 1732 Collins Avenue in Miami Beach. Complimentary GREY GOOSE Vodka cocktails, hors d’oeuvres and music will be offered from 8 to 10 pm while guests have the chance to purchase the advanced priced tickets.

The MOCA BASH Surf’s Up Silent Auction will offer a fantastic array of items and opportunities including original artwork by Raymond Pettibon Daniel Arsham, and Russell Crotty; hotel stays at the Taj in India, and Rustic Inn in Jackson Hotel, WY ; VIP passes to The Armory Show in New York and Art Basel Miami Beach; dinner for 8 prepared by the chef from STK; a tour of Wynwood galleries with MOCA Director Bonnie Clearwater. Bidding will be available online after January 10 at www.mocanomi.org/cmarket.

MOCA BASH Surf’s Up builds on the excitement of MOCA’s previous benefits: Bohemian Bash, POP Love, POP Soup, POP 10, POP 8 ½ and POP Bollywood which all raised funds for the museum’s Permanent Acquisition Fund and MOCA Programs. Over 800 guests are expected to attend.

WHAT: MOCA BASH Surf’s Up

WHERE: Museum of Contemporary Art