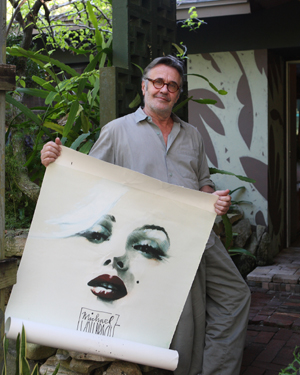 Guests will have the opportunity to meet and mingle with Michael Vollbracht during the personal appearance.  The designer will also be on hand to sign copies of his acclaimed book, Nothing Sacred and discuss some of his paintings which will be on display at Saks Bal Harbour in spirit of Art Basel.  A percentage of the day’s sales will be donated to Crohn’s and Colitis Foundation of America’s Florida Chapter.

Michael Vollbracht is a true renaissance man.  For over forty years, he has worked for some of the most powerful institutions in the art and fashion fields.  Michael Vollbracht, the fashion designer, clients have included Elizabeth Taylor, former First Lady Laura Bush, Barbara Walters, Janet Jackson,  Cher, Mrs. Al Gore, and many more.  Even Joan Crawford, Peter Allen, Trisha Nixon and Larry Hagman have worn his clothes.  Oprah, Angelina Jolie, Julia Roberts and Beyonce have worn Vollbracht on the cover of O, Voque, Vanity Fair, and In Style respectively.  Today, Michael Vollbracht produces a small collection of clothes and furs for private customers and exclusive stores.

The Fur Salon on Two