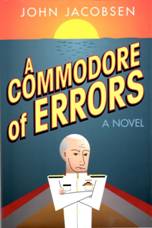 Captain John Jacobsen debuts as an author with the release of a witty book entitled, A Commodore of Errors, the first-ever novel written about the United States Merchant Marine Academy, with an enjoyable comic effect. Jacobsen has chosen Miami as the first stop for his book signing tour, where a special reception and reading will be held.

WHO:              Captain John Jacobsen, a Coconut Grove resident, is a graduate of the United States Merchant Marine Academy, who spent 15 years plying the world’s oceans as a ship’s officer on cargo and passenger vessels. Today, Jacobsen is a harbor pilot at the Port of Miami and the Chairman of the Biscayne Bay Pilots Association. His notes and diaries over the years inform his writing.

Commodore Robert S. Dickey is the outrageously supercilious title character. Watching him strut, plot, flaunt, and flout his way through the story is in itself enough to evoke mirth. Give him so memorable a foil as the indomitable Mrs. Tannenbaume, a “woman of unfortunate stature” to his critical eyes, who consistently manages to one-up him, thanks to an annoying ability quite beyond his ken, and the book explodes with moments sure to cause readers to empathize even if they’ve never set foot on a seagoing vessel. Including a supporting cast suitable to the outwardly starchy, secretly licentious environs of merchant mariners, the novel rollicks along with well-paced speed and plot turns. Drawing on his experience as a U.S. Merchant Marine Academy graduate and career as ship’s officer and harbor pilot, Jacobsen infuses his writing with old-fashioned, very sly hilarity based in the unintended vagaries of love, ambition, greed, meddling, and their various combinations.