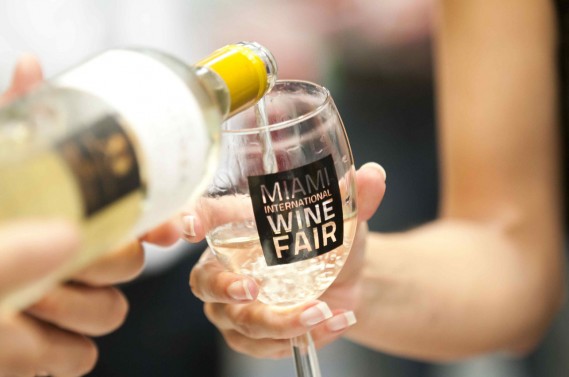 The Miami International Wine Fair (“MIWF”) presents the 11th annual edition September 14 – 16, re-opening the grand tasting experience to the public for one day only on Saturday, September 15 from 5:00 to 8:00 p.m.at the Miami Beach Convention Center (Hall A, entrance on Washington Avenue).  Established as one of the leading trade expositions in the country, MIWF’s consumer program is back by popular demand.  Industry professionals and enthusiasts alike will have their choice of varietals from more than 300 winery portfolios representing 16 countries, namely Argentina, Brazil, France, Italy, Portugal, Romania, South Africa and Spain.

General admission ($95 in advance; $125 at the door) includes an unlimited sampling of unique wines not yet available in the United States, complemented by foods from South Florida’s favorite eateries. Tickets for industry professionals ($30 in advance; $45 at the door) require presentation of valid ID – with business card identifying them as members of the trade –  and grants access to daily seminars starting September 14, and to the exhibitor hall September 15 – 16 from 10:00 a.m. to 5:00 p.m. inclusively.  For more information, please call 866.887.WINE or visit www.miamiwinefair.com.

America’s love affair with wine has been on the uptake for the past decade and just within the past year, has grown by more than 5 percent, surpassing in some states the average per capita consumption of several European countries. While the median national intake remains at a low 11 liters per capita, states such as Florida, Massachusetts, New York, New Jersey, Connecticut, Illinois, California and Washington are drinking in excess of 15 liters per capita and as close to 20 despite the downturn economy.

The lucrative U.S. wine industry is controlled by a handful of large corporations, but the rise of new players is coming into its prime. Americans are embracing diversity and playing a paramount role in quality, branding and value for the dollar.  In 2011, MIWF  saw an increased presence from France, Spain, Argentina and Chile, making up nearly 80 percent of the fairgrounds.  Wineries from Australia, Brazil, Canada, New Zealand, Portugal and South Africa were also fan favorites.  More than 150 importers, distributors and retail chains from 50 states participated in the “Buyers’ Program,” and with 2,000-plus pre-scheduled meetings with qualified, pre-selected buyers, international wineries received a well-curated opportunity to benefit from the country’s $32.5 billion industry.

While organizers remain focused on building business possibilities for trade, the 11th edition offers a new layout that expands across two floors with rooms organized by country and theme.  The overall experience is easier to navigate and more personable for consumers.  Taking visitors on a journey through the vineyards of the world, a compelling seminar series, guided tastings and a team of volunteers lead by the American Institute of Wine and Food will transform the convention center into pure wine country.