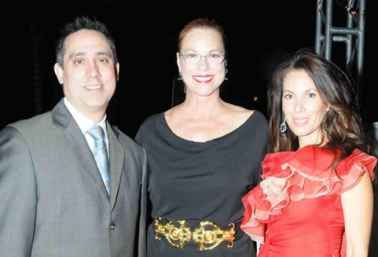 The inaugural Miami Style Awards not only recognized South Florida’s fashion elite in grand style at the W South Beach, but organizers officially announced during the event that Miami International Fashion Week will return to Miami Beach in 2011 and will be rebranded Miami Beach International Fashion Week (MBIFW). The largest Latin American and international fashion event in the U.S. drawing innovative designers from around the world is scheduled to take place at the Miami Beach Convention Center March 3 – 6, 2011.

Since leaving Miami Beach in 2006, the annual event has grown significantly in its global reach and has earned an influential role in South Florida’s garment, tourism, international business, and hospitality industries.

“During the 2010 shows at the Shops at Midtown Miami, we had more than 58 international designers from 22 countries throughout Latin America, the Caribbean, India, the Philippines, Sri Lanka, Pakistan, Lebanon, Europe who unveiled their latest collections in women’s evening wear, prêt-a-porter, swimwear, men’s wear, jewelry and accessories,” said founder and President Beth Sobol. “Overall, it’s estimated that Fashion Week contributes about $10 million annually to the local economy as participants spend money on hotels, restaurants, entertainment, and transportation.”

MBIFW will continue several of it’s trademark events such as the exciting Miami Moda & Music Awards® show that takes place on the final night and presents honors and awards to pioneering designers and features live performances from electrifying recording stars.

During the Miami Style Awards, the five honorees chosen for their personal style as well as their extraordinary community service were socialites and philanthropists Lea Black, Abigail Pollak, and Alexia Echevarria; renowned shoe designer Lisa Pliner; and successful beauty and fashion entrepreneur Loren Ridinger. Later in the evening, Grammy-winning singer, producer and composer Albita took the stage for an amazing performance.

Beth Sobol, President of Sobol Fashion Productions, Inc., founded Miami Fashion Week® in 1999 following a successful career as an international fashion model. She has worked with some of the fashion world’s most influential designers and producers and launched Miami Fashion Week to provide a platform for designers from Latin America to gain international exposure.  During the past 12 years, MFW has evolved into one of the world’s premier fashion events spotlighting designers from Europe, USA and Canada, the Caribbean, Middle East and Asia as well as the largest showcase of Latin American design talent in the United States.