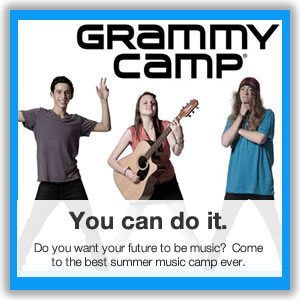 The GRAMMY Foundation® announced today that 111 talented high school students from 93 cities and 34 states across the United States have been selected as participants in the seventh annual GRAMMY Camp®.  The Foundation’s signature music industry camp for U.S. high school students will be held in both Los Angeles from July 9–18 at the University of Southern California Thornton School of Music and New York from Aug. 2–8 in Brooklyn, N.Y.

Held for the past six years in Los Angeles, the program is expanding to the East Coast to reach a broader range of students. Students were able to apply to either or both sessions of GRAMMY Camp, and tuition was discounted for participation in both sessions. Financial aid is available and approximately 70 percent of GRAMMY Camp participants who have applied for financial aid have received assistance. This program is supported in part by Best Buy, Converse, and the Hot Topic Foundation.

“Our GRAMMY Camps offer young people highly interactive settings created by GRAMMY®-winning artists and industry professionals where they can explore a range of careers in the music industry, and with the launch of our New York camp we’ve enrolled the largest number of GRAMMY Campers to date,” said Neil Portnow, President/CEO of The Recording Academy® and the GRAMMY Foundation. “Everything about this experience is unique and challenging in the best possible sense, and as we enter our seventh year, I take great pride in the role GRAMMY Camp has played in helping teens achieve their musical goals, as well as fostering friendships and musical collaborations that continue beyond the program.”

Financial assistance for GRAMMY Camp is offered to qualified students. This year, a portion of these resources was generously provided by ASCAP, BET, the Ella Fitzgerald Charitable Fund, the Ford Motor Company Fund, and the Hot Topic Foundation, as well as several individual donors.

GRAMMY Camp N.Y. is a seven-day residential program for high school students that will be held in New York. It offers campers the opportunity to work in integrated industry teams consisting of three fields: Music Business & Production; Singer/Songwriter; and Performance for Bass, Drums, Guitar, Keyboard, Vocal and Winds & Strings. This real-world, hands-on environment will provide an in-depth look at the entire creative process from the first spark of original material through the promotion of a finished product, and will culminate in a launch party at the Best Buy Theater in Times Square on Sunday, August 7 .

The GRAMMY Foundation® was established in 1989 to cultivate the understanding, appreciation and advancement of the contribution of recorded music to American culture — from the artistic and technical legends of the past to the still unimagined musical breakthroughs of future generations of music professionals. The Foundation accomplishes this mission through programs and activities that engage the music industry and cultural community as well as the general public. The Foundation works in partnership year-round with its founder, The Recording Academy®, to bring national attention to important issues such as the value and impact of music and arts education and the urgency of preserving our rich cultural heritage. Campbell’s Labels For Education program is proud to be the official education partner of the GRAMMY in the Schools programs. For more information, please visit www.grammyintheschools.com.