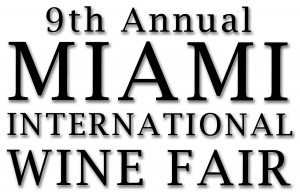 The 9th annual Miami International Wine Fair  (“MIWF”) announces the largest program to date with the anticipation of more than 1500 wines from 20 countries, 80,000 exhibitor square-feet, and the return of the Collector’s Club – an exclusive pavilion featuring the world’s top-rated wines.  Organizers have also extended the traditional two-day event into a comprehensive four-day trade, education and grand tasting program from October 14 to 17, with activities open to the public on October 15 and 16, 2010 at the Miami Beach Convention Center.  To purchase tickets and for more information please call 866.887.WINE or visit www.miamiwinefair.com.

“We are extremely excited about this year’s Wine Fair,” said David Bernad, MIWF founder and president.  “Not only is the economy on a path to recovery, we are also seeing more foreign producers than ever determined to invest in the U.S. wine market.  With wine consumption lagging in Europe and everywhere else in the world, wineries are flocking to our Fair to find new distribution channels while solidifying their existing relationships.”

Hosting a series of events, wine tastings and seminars, the Miami International Wine Fair is securing a dynamic mix of exhibitors in line with consumer trends and demand:

·    Chile’s spirit translates through its resilient and steadily stabilizing wine industry following the major earthquake that hit South America in February 2010.  The Berlin Tasting-New York, a prestigious 10-wine competition, attests to the country’s bold strength as its high-end Carmenère recently topped wines from Napa Valley and Bordeaux to win best in show .

·    New Zealand will increase their presence at the 2010 MIWF in an effort to expand their market reach.  As the second largest wine consuming state in the U.S., just after California, Florida possesses a key audience to whom producers will reveal their quality work with Pinot Noirs.

·    Argentine Malbec, the uniquely rich and full-bodied varietal which continues to experience exponential popularity in the U.S., is expected to be a continued favorite for Fair-goers.

·    The rapidly emerging Grenache, a dry, difficult grape, best sourced from aged vines, is to be represented by Aragon, Spain – a region boasting some of the oldest vineyards in the world.

·    Sopexa’s extraordinary success at the 2009 MIWF has prompted producers to significantly enlarge their booth with added focus on the regions du jour, the Loire and Rhone Valleys.

Parallel to its public appeal, The Miami International Wine Fair offers Latin American and European wine producers a platform to forge valuable trade relationships.  As a result of the 2009 agenda, more than 500,000 9L-case sales and purchasing orders were generated.  On the heels of last year’s success, two trade seminars – What sells in America and Exploring Wine in America; an expanded wine buyer program; an industry-only tasting and targeted wine dinners will also be major components of the upcoming Fair.

Further, Vintrade, the rapidly growing organization responsible, alongside Iberwine, for producing the Miami International Wine Fair, is pleased to announce the appointment of Jennifer Massolo as MIWF Executive Director.  A member of the Fair’s founding team in 2000, Massolo previously held positions with the Remy-Cointreau Group (now Maxxium) in Vancouver, Canada, and Concha Y Toro in Santiago, Chile.  Her superior leadership skills and industry experience will uncork this 9th edition in spearheading a well-rounded program that is both a consumer and trade wine extravaganza.