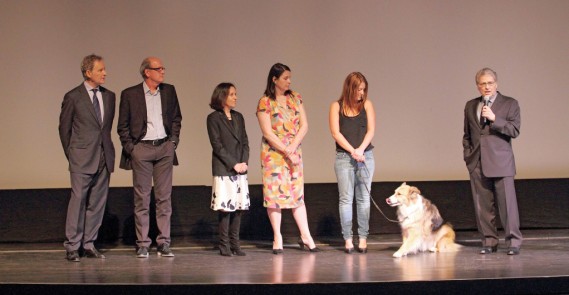 The Festival was thrilled to welcome Lawrence Kasdan to the Gusman Center last night for the East Coast premiere of Darling Companion along with his wife Meg, who co-wrote the script and executive produced the film, members of the cast including Kevin Kline, Richard Jenkins and the ever darling Casey (“Freeway” in the film) whose paws are definitely made for walkin’ the Gusman Center stage, and producer Elizabeth Redleaf.  Kasdan revealed that, in addition to being born in Miami, he also attended Miami Beach’s Nautulis Middle School.  During the Q&A, Kevin Kline said that shooting Darling Companion was the most fun he had ever had on a film set in his career. Twitter was buzzing with enthusiastic reactions to this delightful comedy.

The Imposter that played to a sold out audience at Coral Gables and generated a lively Q&A with director Bart Layton. The film promises to be one of the most talked about documentaries of the year. Its next screening takes place on Thursday, March 8, that happens to be the director’s birthday.

Yesterday also included the Festival’s celebration of the Spotlight on Québec Cinema program with a late afternoon reception at The Betsy – South Beach on Ocean Drive. Director Philippe Falardeau spoke about his film Monsieur Lazhar and producer Andre Rouleau spoke about his film Starbuck following remarks by the General Consul of Canada in Miami, Louise Leger, and the new Delegate of Québec (Atlanta), Joanne Boyer.  The Québécois joie de vivre was well represented with much good humor and laughter!  Later, both films unspooled to appreciative audiences at Regal South Beach Cinemas.