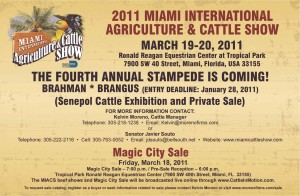 The Fourth Annual Miami International Agriculture & Cattle Show (MIACS) is coming to Miami on Saturday, March 19, 2011, and Sunday, March 22, 2011 with hopes of corralling a crowd, interested buyers and a serious competition amongst breeders.
From the Andalusian and Paso Fino horse shows, to the horseback cattle herding and the horseback skilled rifle and handgun shooting competition, as well as the day-long cattle shows, there was something fun and worthwhile to engage everyone.
Close to 50,000 people attended the 3rd Annual Miami International Agriculture & Cattle Show (MIACS) held at the Ronald Reagan Equestrian Center at Tropical Park last year. (MIACS) drew potential buyers from 22 countries including Russia, Argentina, Brazil, Panama, and Colombia … and 12 breeds of cattle from 15 states including Florida, Georgia, Texas, Arizona, Arkansas, and Missouri … along with a whole lot of excitement!

When Miami-Dade County Commissioner Javier Souto created the concept of an International Agriculture & Cattle Show to promote Florida’s largest industry which is agriculture and to promote Miami as the gateway to the United States for international commerce with Latin American and the Caribbean, a lot of people thought that this would not be possible. Miami has become the international conversation circuit for cattlemen and has emerged as world known figure for the Agricultural and Cattle exhibitions.

MIACS also drew the media attention of the Associated Press and dozens of media outlets picked-up the AP story about “Cows on the catwalk in Miami for agriculture show.”  The story was carried by USA Today.com, MSNBC, CNBC, Forbes, ABC News, CBS News, and major dailies such as The Washington Post, San Francisco Chronicle, Chicago Tribune.com, Star-Telegram.com (Dallas-Ft. Worth), the International Herald Tribune—the global edition of the New York Times—and even The Journal of Turkish Weekly based in Ankara, Turkey.  Media sponsor Univision Radio also heavily promoted the event throughout the Miami market.

Residents and visitors from as far away as London enjoyed two days of fun, sunshine, and cool breezes, as they toured the displays of exhibitors of plants, flowers, fruits, and vegetables, along with informational booths hosted by experts on agriculture, gardening and landscaping—a dream event for lovers of fresh produce and horticulture, and industry professionals.  The public was also treated to arts and crafts vendors, roasted corn, grilled foods, ice cream, live bands, and more.  Meanwhile, kids of all ages couldn’t resist the large area of mechanical bulls, hamster water rides, bounce houses and other exciting attractions.