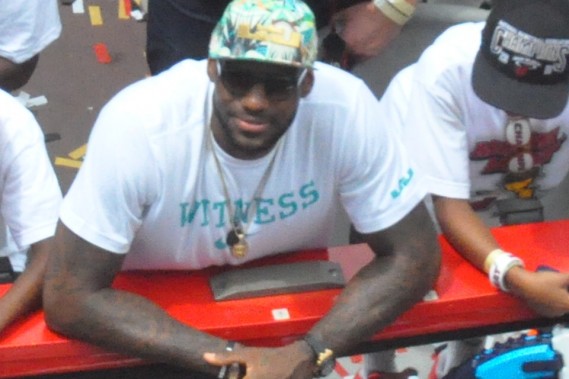 The heat was on in the Magic City today with index rising to over 90 degrees Fahrenheit, an overcast sky that threatened the parade and heavy traffic into the lower Miami. However, this atmospheric change or transportation gridlock did not deter the nearly half million fans who lined the streets and sidewalks of downtown Miami to honor the three time champions, and back to back NBA Champions, the Miami Heat for a well fought battle against the San Antonio Spurs.

The road to the championship has been an uphill one, but in the end Wade, Bosh, James, Chalmers, Allen, The Birdman, Udonis and the entire Miami Heat clan gave us something to cheer about and taught fans an important lesson, “It’s not over til’ it’s over.” 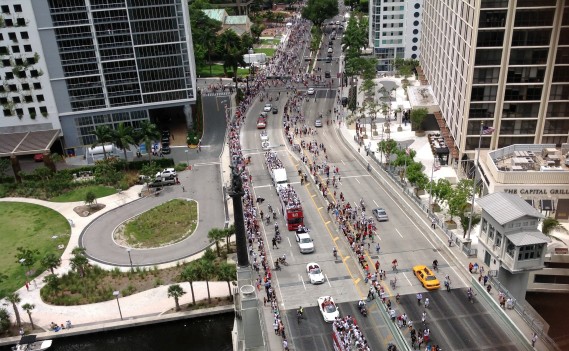 Area hotels capitalized on the celebratory event by hosting viewing parties for their guests and media. The Epic Hotel, one of downtown’s first luxury hotel had their exclusive staging on their newly expanded terrace bar which was  in the immediate path of the jubilee. It sits on the parade’s route, and with all the rooms having balconies allowed guests a superior vantage point than other hotels. Guest were treated to a complimentary coffee, juice and pastries, and were introduced to a special HEAT themed menu that included specialties from the bar’s outside grill including Pulled Pork Tacos, Romaine, Bacon, Basil ($9) along with HEAT Bloody Marys ($5).

“We are fortunate because of the great view, and we sit on the parade’s route,” says Eric Jellson, area director of sales and marketing at Epic Miami.

From our vantage point we watched as confetti rained on the red and white double decker buses transporting the players, their families, friends and staff members. It was a glorious day in Miami to see Pat Riley, Micky Arison, Erik Spoelstra and Alonzo morning float down the parade followed by Chris Bosh clutching the shiny Larry O’Brien trophy like a new born baby; Dwyane Wade waving his ring, The Birdman flopping his wings while Udonis looked on.

Miami is known for throwing huge bashes, and it seemed King James party began atop the float with his stogie in hand.

The merry making culminated in the American Airlines Arena with a team recognition event for season ticket holders and the Heat players performing the Harlem Shake.

The Heat team is still a young team with a lot of possibilities. Hopefully a year from now we will be basking in the triumph of the third NBA title.

Thanks to the Epic Hotel for hosting us.