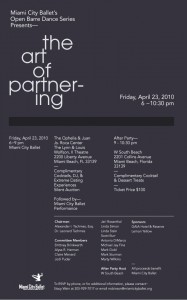 According to a survey by Travel + Leisure magazine, Miami is home to the best looking people in the country. So why is it so hard for sexy, successful singles to meet? Because South Beach nightclubs are world-famous for partying, not partnering. Life in one of the most fabulous cities on the globe has its perks, but what Miamians really want is someone to share it with.

Miami City Ballet (MCB) presents The Art of Partnering, an event for singles that is an ode to the legendary partnerships that are the foundation of ballet. From the bond of trust formed by dance partners, to the shared artistic and physical connection that exudes a unique romance and intimacy, it is no wonder that the Company has generated several enduring love stories. Husband and wife duos include principal dancers Jennifer Kronenberg and Carlos Guerra, principal dancer Haiyan Wu and principal soloist Yang Zou, and principal MCB dancer Deanna Seay and former Company member Mikhail Nikitine, who became partners off-stage after meeting at MCB. The Ballet is led by long-time couple, Founding Artistic Director and CEO Edward Villella, and his wife Linda, who is the Director of Miami City Ballet School.

MCB hopes to inspire patrons who are in search of the perfect partner with this exclusive singles event, which will be well-attended by some of Miami’s savviest single and successful professionals.

The event will take place in the intimate setting of the MCB studios in Miami Beach (The Lynn & Louis Wolfson, II Theatre at The Ophelia & Juan Js. Roca Center) on Friday, April 23 when the lobby will be transformed into a lounge featuring music, cocktails and hors d’oeuvres from 6:00 p.m. to 7:30 p.m., followed by an up-close and personal performance by MCB dancers and a talk on the art of partnering, lead by Villella, one of America’s greatest male dancers. Guests can also indulge in an Extreme Dating Experiences Silent Auction by bidding on items and experiences for two, such as a date on a private sail boat, dinner at The Setai or Wish or a stay at The Shore Club, to name a few. Patrons can then let loose (hopefully with a new dance partner) at a private after-party beginning at 9 p.m. following the performance, at Grove at W South Beach, located a few steps away.