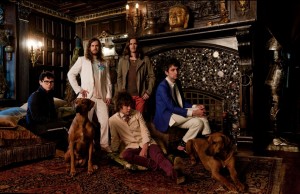 MGMT brings its unique psychedelic pop sound to the intimate Fillmore Miami Beach at the Jackie Gleason Theatre on Tuesday October 26th at 8PM.  This is part of the Cruzan Concert Series.

MGMT is an American band based in Brooklyn, New York, consisting of Ben Goldwasser and Andrew VanWyngarden. Formed at Wesleyan University and originally with Cantora Records, they signed with Columbia Records and Red Ink in 2006.  On October 5, 2007, Spin.com named MGMT “Artist of the Day”. On November 14, 2007, Rolling Stone pegged MGMT as a top 10 “Artist to Watch” in 2008. The band was named 9th in the BBC’s Sound of 2008 top 10 poll.  Their first album as MGMT, Oracular Spectacular, debuted at number 12 on the UK album chart and number six on the Australian ARIA Charts, and hit number one on the Billboard Top Heatseekers chart. It has also been named the 18th best album of the decade by Rolling Stone magazine and was named the best album of 2008 by NME. MGMT also appeared prominently in Australia’s Triple J Hottest 100 2008, coming in 2nd with “Electric Feel”, 5th with “Kids” and 18th with “Time to Pretend”.  MGMT was nominated for the 2010 Grammy Award for Best New Artist, and their track “Kids” was nominated for Best Pop Performance By a Duo or Group with Vocals. These are the first Grammy nominations for the band. Their second album, Congratulations, was recently released and they have just been added to the lineup for the well-known Voodoo Experience 2010 taking place over Halloween weekend in New Orleans, LA.

Live Nation is the future of the music business.  With the most live concerts, music venues and festivals in the world and the most comprehensive concert search engine on the web, Live Nation is revolutionizing the music industry: onstage and online.  Headquartered in Los Angeles, California, Live Nation is listed on the New York Stock Exchange, trading under the symbol “LYV.”   Additional information about the company can be found at www.livenation.com under the “About Us” section.