Megan Fox and Machine Gun Kelly had a thrilling night in Las Vegas. At around 9 p.m. last night, the two lovebirds took in two of the rides atop The STRAT Hotel, Casino & SkyPod’s iconic 1,149-foot-tall tower: Big Shot and X-Scream.

The pair, both filled with excitement, took in 360-degree views of the Las Vegas Strip and the surrounding Las Vegas Valley from the tower’s incredible circular Observation Deck. Next, along with a couple of their friends, Fox and Kelly walked up the stairs to the roof of the tower, where they were visibly blown away by the spectacular view of Las Vegas at night. While Kelly appeared apprehensive to ride the Big Shot, which launches riders 160 feet in the air at 45 miles per hour to a height of 1,081 feet and down again; Fox seemed eager to take the ride. The two were strapped into the ride along with their friends and flashed big smiles as the ride shot them into the sky. Fox was overheard saying how she loved the “freeing feeling” of the ride.

By the time they finished riding Big Shot, fans took notice of the famous couple, who smiled and exclaimed, “Thank you!” to being congratulated on their recent engagement. The couple and their friends made their way to X-Scream, which has been compared to playing on a massive teeter-totter 866 feet above the ground. X-Scream propels riders headfirst, 27 feet over the edge of the SkyPod, where they dangle weightlessly above the Las Vegas Strip before being pulled back and propelled over again for more.

The couple and their friends, who were all smiles, talked about the view and the incredible Las Vegas view at night. They stopped by the Observation Deck for one last look at the view before heading out for the next stop in their night out. 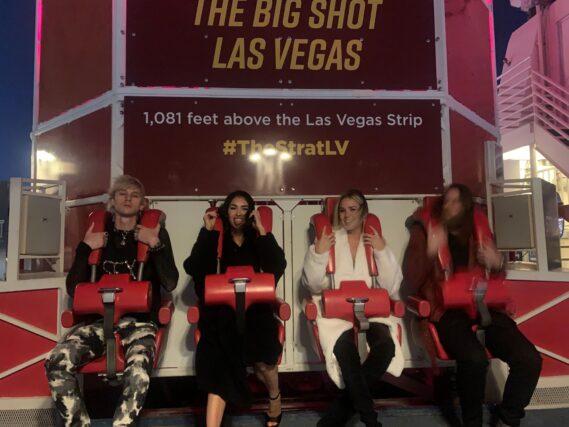 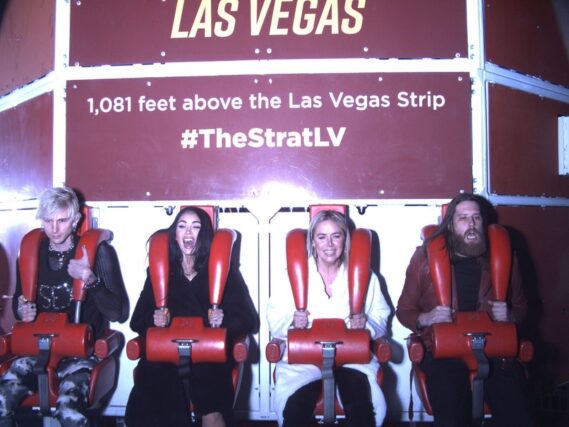 courtesy of The STRAT