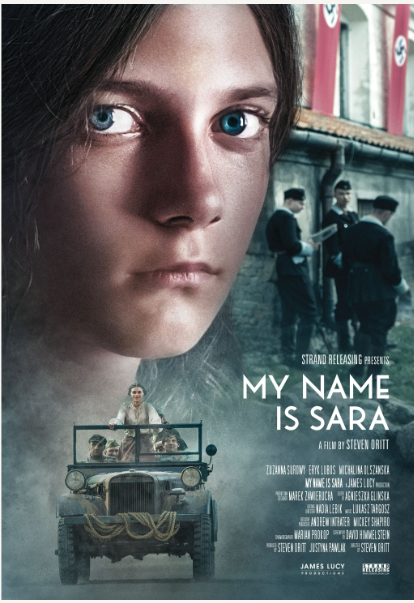 After its long-awaited debut in U.S. theaters, My Name is Sara, directed by Steven Oritt and starring Polish actress Zuzanna Surowy, is coming to Miami Dade College’s (MDC) historic Tower Theater Miami where audiences can watch the film on the big screen and enjoy a Q&A with Oritt.

My Name is Sara is based on the astonishing true-life story of Sara Góralnik. This powerful saga of courage and compassion follows the 12-year-old Sara, a Polish Jew who lost her entire family in the Holocaust yet struggled to outlast the Nazis and fought to keep alive her Jewish faith. After a grueling escape, Sara steals her Christian best friend’s identity and finds refuge in a small Ukrainian village, where she is taken in by a farmer and his young wife and hidden in plain sight, masquerading as a Christian. But Sara soon discovers the dark secret of her employer’s marriage, which compromises the greatest secret she must protect at all costs, her true identity.

“Given the current war in Ukraine I would like to believe that the pressures that the film’s Ukrainian and Jewish characters face resonate now more than ever. The film’s producers and I never imagined that Ukraine would again be invaded and at war when we first started developing the film some six years ago,” said Oritt.

Oritt was compelled to tell Sara’s story and adds, “There is a scene in the film where Sara’s mother tells her that she must survive, and that her survival will be their revenge. That is what drove me to make the film…by putting Sara’s story out there into the world, and sharing it with audiences, we all participate in carrying on Sara’s legacy and fulfilling her mother’s wishes.”

Born and raised in Miami, Oritt has deep roots in the community. His grandmother Selma Oritt was a Miami philanthropist and through the Selma Oritt Foundation was a founder of Mt. Sinai Hospital, Temple Beth Sholom and many other Jewish organizations including the Jewish Museum on Miami Beach. My Name is Sara is Oritt’s feature film debut.

***My Name Is Sara had its North American Premiere at the 2020 Miami Jewish Film Festival and won the Audience Award for Best Narrative.

Tickets are $12.75 per adult; $10 per senior or student. To purchase tickets, visit www.towertheatermiami.com.