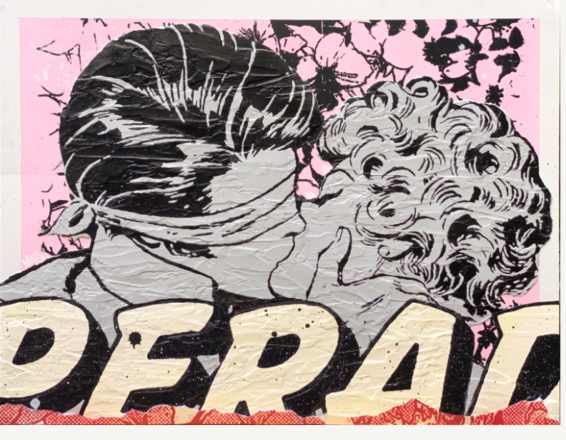 “We’re thrilled to be able to support talented, local artists like Daniel Marin by providing a spectacular space where the public can discover their artwork,” said Nicolas Calzada, Interim Executive Director of the Miami Film Festival and Tower Theater. “Tower Theater Miami is steeped in rich Cuban history, dating back to the early 1960s. This is an opportunity for us to celebrate our roots while shining a spotlight on artists who are doing great work in our community.”

A self-taught artist, Marin creates his work under the conceptual moniker Department M. His paintings bring together elements of pop, abstraction, street art, carpentry and décollage, depicting colorful and surreal moments in time. Marin sources imagery from magazines, comic books, newspapers and many other forms of media, blending features from each to craft the images in his work. The Miami-bred artist develops each piece using a layering approach including silk-screening, freehand painting, hand cut stenciling and collage work, producing impactful compositions.

“It is an honor to be chosen to have my work on display in a space that has great significance for me,” said Marin. “As a born and raised Miami local, and a member of the Cuban community here, I have fond memories visiting Tower Theater with my parents and grandparents. I hope everyone who sees my work will engage with both the humor and tension found throughout my visual narratives.”

Located next to famed Domino Park in the heart of Little Havana, Tower Theater Miami is known for featuring films that helped introduce many Cuban families, who fled to Miami in the early 1960s, to American culture. Some of this history is chronicled in large portraits donated by HistoryMiami along the walls of the Theater’s second-floor exhibit space where Marin’s work will also be on display. Back then, the Theater altered its programming to include English-language films with Spanish subtitles, and eventually Spanish-language films, a tradition which continues today.

Over the years, Tower Theater Miami has become a social gathering spot for both movie and culture lovers alike. The Theater regularly features indie films; year-round events including movie premieres with actors, directors and producers; and culturally-specific exhibits. Additionally, it is home to MDC’s acclaimed Miami Film Festival (March 3-12, 2023) and GEMS (November 3-6, 2022), a four-day event to present “the jewels of the fall cinematic season.”