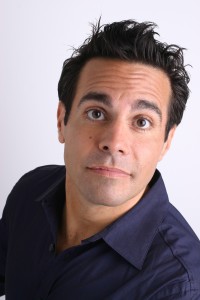 Hailed by The New York Post as “the funniest show in town, hands down,” CELEBRITY AUTOBIOGRAPHY will play at the Carnival Studio Theater at the Adrienne Arsht Center from May 5 – 15. While the show has been known to have surprise celebrity guests, stars already slated for the first week of the Miami run include “Saturday Night Live” funny lady Rachel Dratch, Tony-nominated actor and comedian Mario Cantone (beloved for his role as wedding planner extraordinaire on “Sex and the City”) and acclaimed multiple Emmy Award-winning TV and stage actress Sharon Gless. For week two of CELEBRITY AUTOBIOGRAPHY, Gless, featured on the popular TV series “Burn Notice” and recently seen in the Miami production of “Round-Heeled Woman” at Gable Stage to rave reviews, is joined by Broadway and TV star Roger Bart, most recently seen as the menacing dentist on ABC’s “Desperate Housewives,” and acclaimed for his laugh-out-loud comedic performances in the Broadway musicals The Producers and Young Frankenstein.

Created and developed by Emmy Award-nominated writer-performer Eugene Pack and Dayle Reyfel, who are also part of the stellar cast, CELEBRITY AUTOBIOGRAPHY delivers juicy and unbelievably outrageous passages from the actual memoirs of celebrities – the ‘he-said, she-said’ accounts of Burt and Loni, Tiger Woods’ “golf lessons,” the re-enactment of Tommy Lee and Pamela Anderson’s courtship and even a hilarious ensemble “playlet” edited together from the memoirs of the most famous love triangle in Hollywood history—Elizabeth Taylor, Debbie Reynolds, and Eddie Fisher. Madonna, Justin Bieber, Mr. T, Suzanne Somers, and Britney Spears are among the other celebrities whose revelatory tomes are often featured in the show. Everyone gets their “fifteen minutes” in CELEBRITY AUTOBIOGRAPHY, even audience members, who are invited to participate in each show.

“Celebrity Autobiography is pure entertainment close up in the Carnival Studio Theater performed  by award-winning celebrities about celebrities,” said M. John Richard, president and CEO of the Adrienne Arsht Center. “We are delighted to welcome this star-studded cast to Miami and look forward to the surprises that may come throughout the run.”

Tickets to Celebrity Autobiography are on sale now. Tickets are $45 and may be purchased through the Adrienne Arsht Center box office by calling (305) 949-6722, or online at www.arshtcenter.org.

$24.50 Student “Rush” tickets will be available for all performances, based on availability. Students with valid I.D. must arrive 15 minutes prior to curtain at the Carnival Studio Theater Box Office at the Adrienne Arsht Center. This offer is available in-person only at the box office, with a limit of two tickets per person.

Running for three sold-out years in New York City and making its Miami premiere at the Adrienne Arsht Center in May, CELEBRITY AUTOBIOGRAPHY is a 2009 Drama Desk Award winner for Unique Theatrical Experience and is one of the most critically-acclaimed, “buzzed about shows” of recent years, according to Entertainment Weekly. The show has been profiled in the top media outlets, including ABC’s “The View” and “Nightline,” NBC’s “Last Call with Carson Daly,” NPR’s “Morning Edition,” CBS’s “Sunday Morning,” CNN’s “American Morning,” and Bravo’s “A-List Awards” as well as Time and the Wall Street Journal. The production has toured extensively in the U.S. with acclaimed performances in Pittsburgh, New Orleans, San Francisco, Chicago, Arizona, and Austin, and at the Edinburgh Fringe Festival, as well as an ongoing production at Los Angeles’s Broad Stage. The show also recently opened at London’s Leicester Square Theatre where it has received rave reviews and plays to sell-out audiences.

Rachel Dratch joined the cast of “Saturday Night Live” in 1999 where she performed for seven years, creating memorable characters including Boston teen “Denise,” the “Lovers” professors with Will Ferrell, junior high school student “Sheldon,” and “Debbie Downer.” She wrote and performed in the two-person sketch show “Dratch and Fey” with SNL co-star Tina Fey. Appearing in multiple revues, Dratch received the Joseph Jefferson Award for Best Actress in a Revue for Paradigm Lost and Promisekeepers Losers Weepers.

Known for his role of wedding planner extraordinaire on “Sex and the City,” Mario Cantone is also a celebrated New York stage actor and stand-up comedian who gained critical acclaim for his Tony-nominated one-man show Laugh Whore. He has starred in numerous productions including the Tony Award-winning Assassins by Stephen Sondheim and John Weidman, Terrence McNally’s Award-winning dramatic comedy Love!Valor!Compassion! and as “Stephano” in Shakespeare’s The Tempest. CANTONE has been featured on multiple Comedy Central programs (“The USO Comedy Tour,” “Chappelle’s Show,” “Premium Blend”) and starred in his own special. His film credits include Sony’s animated film Surf’s Up, The Aristocrats, and Sex and the City 2.

Multiple Emmy and Golden Globe Award-winner, Sharon Gless recently received her 10th Primetime Emmy Award nomination for her portrayal of the chain-smoking, obsessive mother Madeline Westen on USA Network’s “Burn Notice,” the highest-rated cable series in the country. Most notably, Gless starred in “Cagney & Lacey” for which she earned two Emmys, a Golden Globe and six Emmy nominations. GLESS is also recognized for her chilling TV performance as Colleen Rose on FX’s “Nip/Tuck,” and the outrageous and beloved Debbie Novotny in the groundbreaking Showtime series “Queer as Folk.” In 1995, Gless was honored with a star on the Walk of Fame.

Stage and screen actor most recently recognized for his role on ABC’s “Desperate Housewives,” Roger Bart is a Tony and Drama Desk Award Winner for Best Featured Actor in a Musical for his role as “Snoopy” in the revival of You’re a Good Man, Charlie Brown directed by Michael Mayer. Bart’s film credits include the Overture film Law-Abiding Citizen starring Jamie Foxx and Gerard Butler, Paramount Pictures’ The Stepford Wives, Hostel 2 and Disney’s Hercules and The Lady and the Tramp II. His Broadway credits include Young Frankenstein, The Producers, The Frogs starring opposite Nathan Lane and Triumph of Love. Most recently, Bart has starred on the TV series “The Lost Room,” NBC’s “30 Rock,” the CBS comedy “Bram and Alice,” and “Law and Order.” His most recent works include a recurring role on the NBC series “The Event” and on Broadway as the title character, ‘Dr. Frederick Frankenstein’ in Young Frankenstein.

Celebrity Autobiography is sponsored in part by Marriott South Beach.

When: December 2, 2:00pm to 3:30pm A roundtable with DMC followed by a reception with HHPH founder Dr. Olajide Williams. Presented by Hip Hop Public Health. Yes, Hip-Hop is one…