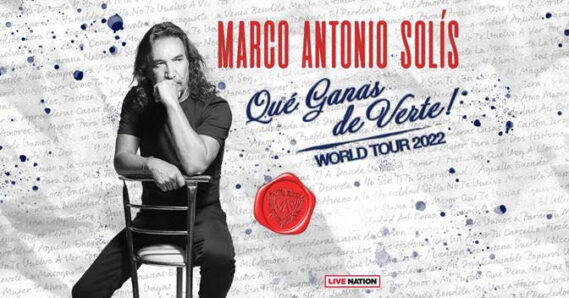 With more that 40 million copies sold and over 9 million monthly listeners across streaming platforms, Marco Antonio Solís is without question one of the most important figures in the rise of Mexican and Latin music to world prominence during the last two decades of the 20th century. Born in Michoacan, Mexico, Solís was only 12 when he formed his first group, Los Hermanitos Solís, with brother Joel. He was still a teenager when he formed Los Bukis in the early ’70s.

Over the course of the next two decades, Los Bukis came to profoundly influence the norteño and tejano music of Mexico and the southwestern United States. Though Solís continued to work closely with Los Bukis, he also initiated a solo career that resulted in platinum certifications for mid-’90s LPs such as Quiereme, Inalcanzable, and Por Amor a Mi Pueblo. Trozos de Mi Alma followed in 1999. Solís ushered in the new millennium with a two-volume live set, En Vivo, and its companion, En Vivo, Vol. 2. His next studio album, Mas de Mi Alma, was released in 2001 and, like his previous solo albums, became a best-seller.

This latest tour announcement for Solís comes on the heels of a legendary nine show stadium tour with Los Bukis. Their Una Historia Cantada across the US celebrated the group’s reunion after 25 years where over 480,000 fans saw them live for the historic limited engagement shows.