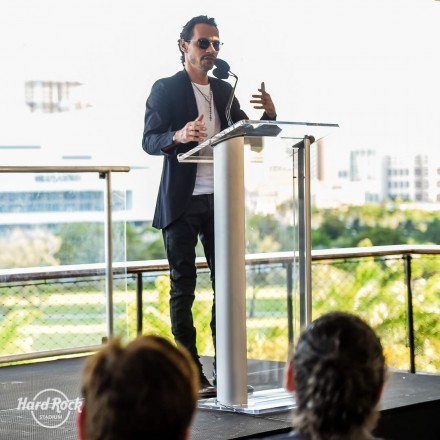 Against the beautiful backdrop of Biscayne Bay and Port of Miami’s waterways, Marc Anthony was introduced as the headliner for El Clasico Miami half time show, a first ever in the history of soccer championships. The matchup between two of soccer’s most storied teams, Real Madrid and Barcelona is expected to be viewed by millions worldwide. “A great moment for the city,” Jorge Perez said.

The Grammy award winner was introduced by his long time friend, real estate mogul and El Clasico’s ambassador, Jorge Perez at the Perez Art Museum in Downtown Miami. “Marc Anthony was the guy that opens PAMM, so he’s a first for all the good things that happen here,” Perez said.

“This is very personal to me,” Marc told the Miami Herald. “It’s at our stadium; its in Miami. This is very nerve wracking,” he continued.

The International Championship Cup was launched in 2013 by Stephen Ross and Matt Higgins with the intention to bring US fans closer to the game of soccer. And to do just that, they have some of the world’s best players for the 2017 matchup which include Neymar, Christiano Renaldo, Garett Bale, Lionel Messi among others.

The Super Bowl is considered the greatest sporting spectacle in all sports arena that is celebrated in grand fashion and its stages have been graced by entertainment’s mega super stars. El Clasico’s aim is to be as spectacular as such and being the first ever half time show, Marc is under immense pressure to shine under the Florida sky to millions of fans worldwide. “My interest is to figure out how to beat Lady Gaga. I’m working on it,” he said. “Appealing to my ex wives was enough as it was,” he joked. “I’ll be ready for the responsibility and I’m going to do what I do.”

Marc’s approach is to keep it local and have confidence in the people who are entrusted to pull off the production. “I’m in great hands. I’m more comfortable singing than speaking,” he shared. “The whole organization, everyone involved is the best in class.”

Various organizations over the years have tried to bring a special spotlight on professional soccer and to make it not only a European or Latin American but to make it a US sport as well. Luckily Dolphins owner, Stephen Ross has been relentless in his efforts to bring the sport to America. “I talk to him more about soccer than about football,” Mr. Perez shared. “He’s excited when he sees El Clasico.”

The Related Group CEO feels that incorporating the United States would be a successful crossover. “Marc is Latin/Hispanic, he’s the definition of the crossover artist. He’s the guy that appeals to all the audience.” Like soccer, Anthony has a wide appeal across all audiences and throughout the world.

Miami is not only the capital of Latin America, its slowly becoming the epicenter of entertainment and hosting an event of this caliber will elevate its stature. “Taking on the responsibility of this event shows what Miami has to offer on a worldwide level,” shared Marc. “This is the perfect venue for many first. Let’s go for it. I’m proud to be sitting here after 30 years in this business saying that there’s going to be a first; all bets on this one.”

When asked by Premier Guide Miami’s Daedrian McNaughton about his athletic prowess, he joked that he’d rather be an owner of a soccer club instead of running around on the field. “Me, a player? I’m more a sucker than a soccer player,” he said jokingly. I move alright but I don’t know about the soccer field.”

El Clasico is set for July 29, 2017 at Hard Rock Stadium home to the Miami Dolphins. Leading up to the match, there will be a plethora of events and fan activities throughout Wynwood, South Beach, Bayfront Park and other Miami neighborhoods.

For more information and to purchase tickets, visit www.internationalchampionshipcup.com.

Fans can follow the ICC on social media at @intchampionscup for exclusive content and announcements, and join the conversation using #ElClasicoMiami and #2017ICC.