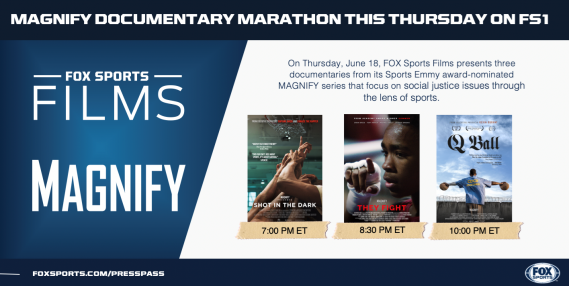 On Thursday, FOX Sports Films presents three documentaries from its Sports Emmy award-nominated MAGNIFY series that focus on social justice issues through the lens of sports.

The lineup begins at 7:00 PM ET on FS1 with “Shot in the Dark,” from executive producers Dwayne Wade and Chance the Rapper. The film focuses on the high school basketball team at Chicago’s Orr Academy as they aspire for greatness under inspirational head coach Lou Adams, while also facing systemic inequities that threaten to claim their futures.

Then at 8:30 PM ET, “They Fight” tells the story of Lyfe Style Boxing, an after-school program in one of the most challenged neighborhoods of Washington, D.C.’s inner city. Produced by Academy, Golden Globe, Emmy and two-time Grammy Award winner Common, “They Fight” centers on Coach Walt Manigan’s efforts to mentor young boxers and help them avoid the same troubles he faced in the neighborhood.

Finally, at 10:00 PM ET, “Q Ball” follows the lives of the San Quentin Warriors — teammates and inmates at “The Q,” California’s San Quentin State Prison. From executive producer Kevin Durant, “Q Ball” shines a light on the personal stories of the inmates as they search for redemption, both on and off the court.