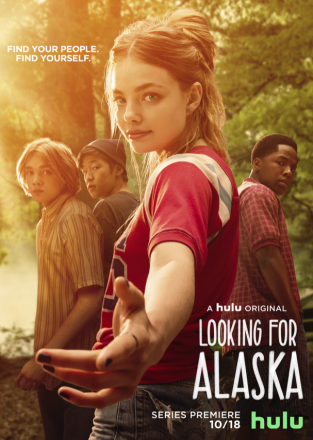 Hulu is excited to share the key art for upcoming Limited Series Looking for Alaska.

All eight episodes of Looking for Alaska will debut on Friday, October 18 only on Hulu.

Looking for Alaska is an 8-episode limited series based on the John Green novel of the same name. Set in 2005, it centers around teenager Miles “Pudge” Halter (Charlie Plummer), as he enrolls in boarding school to try to gain a deeper perspective on life. He falls in love with Alaska Young (Kristine Froseth), and finds a group of loyal friends. But after an unexpected tragedy, Miles and his close friends attempt to make sense of what they’ve been through.

“Looking for Alaska” is the award-winning, genre-defining debut from John Green, the #1 international bestselling author of “Turtles All the Way Down” and “The Fault in Our Stars.” With millions of copies sold, the novel which was released in 2005 is a New York Times Bestseller, a USA Today Bestseller, a Los Angeles Times Book Prize Finalist and TIME Magazine‘s 100 Best Young Adult Novels of All Time. Green was awarded the American Library Association’s Michael L. Printz Award for “Looking for Alaska,” which PBS recently included in its Greatest American Read – 100 Most Beloved Books.